Art, Education, and Protest in Hungary: The Radical Vision of FreeSZFE 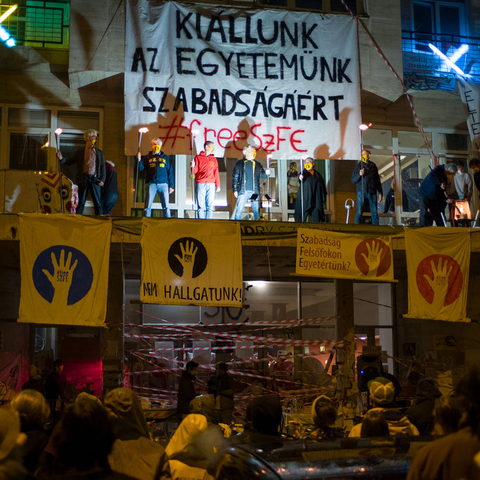 In an unprecedented move during the summer of 2020, students and faculty of the University of Theatre and Film of Budapest stood up against the nationalist-populist government’s measure to take full control of the country’s most prestigious art school. First, the institution’s full leadership resigned, and then, in a spectacular protest event, students occupied the iconic downtown building of the university. In the following months, a newly formed self-governing student body organized the most powerful and creative protest movement to this day against Viktor Orbán’s autocratic regime. Meanwhile, the resigned faculty laid the foundations of a new independent organization, the FreeSzFE Society, which has evolved into a vibrant artistic community. Today it offers year-long courses and workshops, produces films and performances, and grants their students diplomas through a network of European universities—all with the support of a wide audience of art-lovers and fans committed to democracy and the autonomy of higher education.

Register to Attend on zoom here

Sponsored by Beinecke Library, the Postwar Culture Working Group, and the Whitney Humanities Center. For more information about the ART & PROTEST SERIES or to join the mailing list, write to kevin.repp@yale.edu