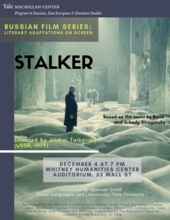 “The best story about a famous filmmaker is the one Mel Brooks tells about Alfred Hitchcock in which, seated at his regular booth at Old Hollywood eatery Chasen’s, the Master of Suspense ordered a massive supper — shrimp cocktail, two-inch sirloin, asparagus smothered in hollandaise, wedge salad, fully loaded baked potato, and two ice cream sundaes — and, upon finishing it and finding himself, somehow, still peckish, commanded the head waiter, “Do it again.” But the second best, in my estimation anyway, concerns the Russian Andrei Tarkovsky, and the production and release of his ponderous, profoundly beautiful 1979 masterpiece “Stalker,” (recently re-released on home video courtesy the Criterion Collection, and appearing in remastered edition in repertory and art house cinemas across the continent). Upon receiving a note from the Soviet State Committee for Cinematography that the film was too dull and slow, and so risked alienating viewers, Tarkovsky responded in kind, ‘The film needs to be slower and duller.’” - for the full review: https://www.salon.com/2017/07/29/why-andrei-tarkovskys-interminably-dull…
1979 | 2 hr 42 mins
Directed by Andrei Tarkovsky
free and open to the public
Sponsors:
Edward J. and Dorothy Clarke Kempf Memorial Fund, Russian, East European and Eurasian Studies Program, European Studies Council at the MacMillan Center, Film and Media Studies Program, Slavic Film Colloquium, the Yale Film Archive, and Films at the Whitney, supported by the Barbakow Fund for Innovative Film Programs at Yale