Conference Recap: The Caspian in the History of Early Modern and Modern Eurasia 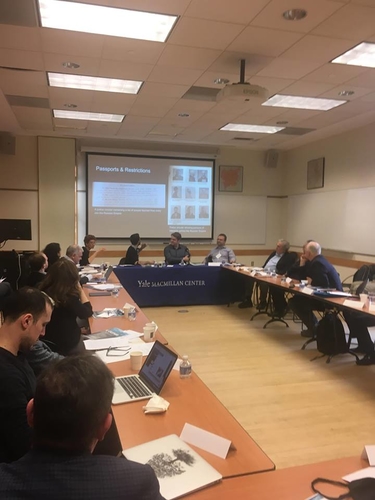 From March 29-31, the Iranian Studies program at the MacMillan Center hosted a three-day conference entitled “The Caspian in the History of Early Modern and Modern Eurasia.” In addition to the Iranian Studies program, the conference received support from the Council on Middle East Studies, the Edward J. and Dorothy Clarke Kempf Memorial Fund, and the Council on European Studies. Over the course of six panels and a keynote talk from Dr. Touraj Atabaki of the Institute of Social History in Amsterdam, the conference discussed the ways through which the Caspian Sea might function as a unit of historical analysis between 1556 and 1941.

The first panel, which included papers from Marina Imasheva of Kazan Federal University, Rachel Koroloff of the University of Göttingen, and Guido Hausmann of the University of Regensburg, addressed the role of the city of Astrakhan and its neighboring area in the history of the region. The papers raised issues of the volume and nature of trade through the Volga Delta, which linked Russia to the Caspian littoral to 1850. They discussed the cultivation of crops and plants of the Persianate world in the lower Volga, and the role of Astrakhan in Russian geographic thought of the early modern era. They further addressed the importation of economic, horticultural, and cartographic expertise from the Southern Caspian and Europe.

The second panel featured Scott Levi of Ohio State University, Ulfatbek Abdurasulov of the Institute for Iranian Studies of the Austrian Academy of Sciences, and Emily O’Dell of Yale Law School. These papers focused on Central Asia and the Caspian in the eighteenth century. They argued against the idea of regional isolation before the Russian conquests while exploring the role of the Caspian in Turkmen and Uzbek politics, economics, and poetry. Furthermore, they focused on the 1740s political crisis of the Bukharan Khanate, Khiva-Russian diplomatic and commercial links via the Caspian. They also analyzed the Caspian and geographic imagination in the works of Magtymguly Pyragy.

Resuming the conference on Saturday, March 30, Matthew Romaniello of Weber State University, George Bournoutian of Iona College, and Murat Yașar of SUNY Oswego connected the northern and western approaches to the Caspian to larger imperial, commercial, and ecclesiastical systems. Their work addressed the activities of the British Russia Company, the Ottoman state, Armenian merchants, and Church officials in the Caspian between the 1560s and 1780s. The panel further advanced the previous discussions by connecting the Caspian Sea region to the broader world economy and imperial competition. It also excavated the network of local interests, specific to the Caspian, on which imperial projects depended.

After this panel, Touraj Atabaki presented his keynote talk, “To Set the Caspian Ablaze: The Soviet Union Beyond its Southern Frontiers (1917 – 1937).” In this talk, Dr. Atabaki addressed Soviet efforts to coopt Iranian revolutionary movements and separatists. The presentation prompted discussion over the degree of centralized Soviet decision-making and whether the early USSR approached the Caspian through ideological considerations or pragmatic ones.

In the afternoon, a fourth panel addressed Russian policies and thinking toward the Caspian from the late eighteenth to early twentieth centuries. The panel consisted of papers from Elena Andreeva of Virginia Military Institute, Kevin Gledhill of Yale, and Rustin Zarkar of New York University. These papers covered a wide range of issues relating to the meaning of the Caspian for Russia’s empire. They addressed the role of Russian Orientalist art and writing, the intersection of Russian law and diplomatic contacts with Iran and the South Caucasus, and the regulation of trade, customs, and smuggling in 1917.

The panel on cultural exchanges and influences across the Caspian Sea featured presentations from Katerina Clark of Yale University, Curator and Scholar Layla Diba, and Firuza Abdullaeva-Melville of the University of Cambridge. This panel shifted from prior discussions on the political and economic dimensions of the region to its literary and artistic production instead. In combination, the papers raised issues of how artistic forms, such as opera and modern and realist painting, flowed south and were cultivated in the Caspian region. It also analyzed the spiritual-geographic imagination of the region in the Russian revolutionary-era poetry of Velemir Khlebnikov.

On Sunday morning, the final panel further addressed the role of the USSR and late Russian Empire in relation to Iranian separatism. It included papers from Denis Volkov of the Royal Netherlands Academy of Arts and Sciences, Iurii Demin of Irutsk State University, and Kayhan Nejad of Yale. The papers considered variations in Soviet policy over time and across areas of the circum-Caspian zone. They also looked at the impact of Russian Orientalist thought, its connection to policy, and the role of the Caspian as a vector for the exchange and development of revolutionary thought.

The conference concluded with a plenary session on March 31. The participants discussed both what conclusions could be drawn from the works presented, as well as areas for further consideration in developing the Caspian as a distinct field of historical research. Topics included a focus on religious institutions and exchange, the spread of notions of modernity, the impact of the Caspian’s unique geography and climate, its modern history of political and ethnic violence, navigation, and key historical industries, such as commercial fishing. In this way, the conference aimed to lay foundations for comprehensive study of the Caspian region and to unite usually distinct fields of research from Central Asian, Iranian, Russian, and both North and South Caucasian perspectives. The conference also raised questions of how the Caspian region might be defined, with possibilities ranging between its narrow coastal lands to extensive structures linking it to the Russian Empire, the Black Sea, Central Asia, and the Persian Gulf.