Conference Recap: Europe After 1918: Poland, the Baltic Countries, and the United States 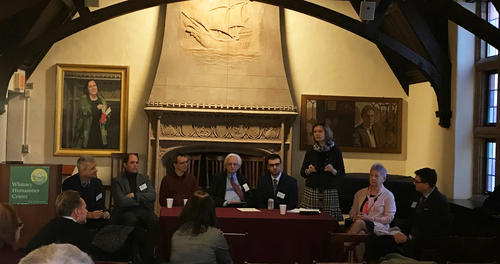 The Program in Baltic Studies of the European Studies Council held a two-day symposium titled “Europe After 1918: Poland, the Baltic Countries, and the United States,” on Friday February 1 and Saturday February 2.

The symposium, which took place at the Whitney Humanities Center, consisted of four sessions which explored topics ranging from the foreign relations of Baltic countries in the interwar era to Polish public relations in the U.S. after 1918.

The first session on Friday featured Andres Kasekamp, a professor and chair of Estonian Studies at the University of Toronto, and Halina Parafianowicz, a professor and chair of World History at the University of Białystok in Poland. Professor Kasekamp opened the session with a presentation titled “Lives of the Hunted: The Foreign Relations of the Baltic States in the Interwar Era.” The presentation provided an overview of the foreign relations of Estonia, Latvia and Lithuania during the interwar period, focusing on global, regional and bilateral perspectives.

“We’re used to thinking of the Baltic states as all in one boat, but their foreign policy orientations [were] completely different,” Professor Kasekamp said, adding that Estonia and Latvia were “status quo powers” at the time, whereas Lithuania was a “revisionist power.”

For her part, Professor Parafianowicz explored the connection between President Woodrow Wilson’s policy — particularly his ideas on Polish Independence — and the narrative of American democratic idealism that took root after World War I. Her presentation was titled: “Woodrow Wilson and Poland. His Legend and American Myth in the Interwar Period.”

The second day of the symposium consisted of three different sessions, the first of which featured Jacek Partyka, a professor at the University of Białystok, and Egidijus Balandis, a graduate student at Vytautas Magnus University in Lithuania. Professor Partyka spoke about Jewish life in Poland and beyond in a presentation titled “A Transatlantic Community of ‘Annexed People’: The Jews of Białystok and their New York City Diaspora, 1918-1939.” The session concluded with Mr. Balandis’ presentation on Lithuanian-American athletic clubs in the interwar era.

The penultimate session of the symposium featured Tomasz Pudłocki, a professor of history at Jagellonian University in Poland, and Charles Perrin, a professor of history at Kennesaw State University. Professor Pudłocki spoke about the evolving perceptions of Poland in the U.S. after 1918 in a presentation titled “Polish PR in the US, 1919-1939 - A Few Remarks.” For his part, Professor Perrin spoke about his experience putting on a traveling exhibit about friendship between Lithuania and the United States. His presentation was titled “The Travelling Exhibit Over the Ocean: A Century of Friendship between Lithuania and the United States.”

The final session of the symposium featured Eriks Jekabsons, a professor at the University of Latvia, and Olavi Arens, a professor of history at Georgia Southern University. Using Latvia as a case study, Professor Jekabsons explored the attitude of the U.S. toward the independence of Baltic countries in the interwar period. Professor Arens concluded the symposium with a presentation titled “Self-Determination or the Unity of Russia: An Indeterminate US Policy on Estonia, 1918-1922.”

Each session was followed by a question and answer session with members of the audience. After the final session of the symposium, attendees were invited to participate in a general discussion with the speakers. The symposium was moderated by Bradley Woodworth, Coordinator of Baltic Studies at Yale University, and Krystyna Illakowicz, senior lector in Polish at the Slavic Languages and Literatures Department.