Degree of difficulty: Nikki Watters dives into her love of languages 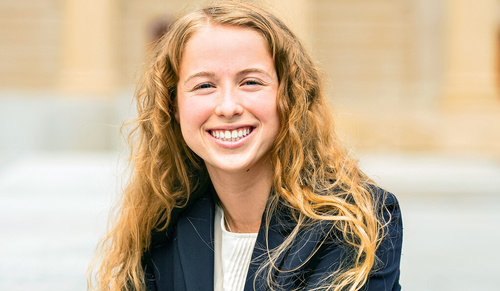 When she was learning to dive competitively as a young girl in Ohio, Nikki Watters had a Ukrainian coach who drove home the elements of a good dive: executing the perfect jump off the platform, keeping the toes pointed, making even the most complex dive look easy.

Watters became quite good. After becoming one of the nation’s best divers, she came to Yale, where she won Ivy League championships in the 1- and 3-meter boards, received first-team All-Ivy honors, and set a Yale record in the 3-meter dive.

But there were other lessons from that childhood coach that, in a subtle way, may have positioned Watters for her post-Yale life. Back then, she was intrigued that he would sometimes speak in Russian. Watters, whose family had emigrated from Russia, eventually asked him to use that language when sharing his feedback from the pool deck.

Watters still loves learning languages. At Yale, where she is a political science major and resident of Morse College, she resumed her study of Russian, taking four courses (including two intensive courses, in which the pace of study is doubled); earned an Advanced Language Certificate in Spanish (which requires five advanced credits); and started learning German during her senior year. All in all, she’ll have taken 16.5 language credits at Yale. She’s also been teaching herself Italian and French on the side.

“Diving gave me the opportunity to travel,” Watters says. “And I’ve learned that there’s something to be said for being able to speak to people in their own language. It helps you learn more about their culture, to connect better.”

Looking forward, Watters is eager to use her growing fluency in Russian not only to improve these personal connections but to better understand international issues. In the fall, she’ll begin a master’s program in Georgetown’s Security Studies Program. Eventually she hopes to work in government, perhaps as a political analyst with an expertise in Russia.

“I’ve found that you can structure your classes around what you really love. Yale is the perfect time to find something that you’re passionate about. Finding out who you are, and what you love. Yale is such a great environment for discovering both.”