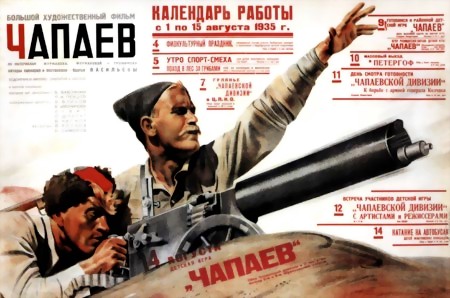 The last screening in the Red Century: Russian Revolution on Film series this semester took place on Wednesday, December 6. The film, Chapayev (Чапаев, 1934), was the first ‘talkie’ in the series.

Chapayev is a very important film in the Russian canon: it is said to be the favorite of Vladimir Putin and it was one of the favorites of Joseph Stalin, and the role Chapayev’s character plays in the popular culture cannot be overstated.

The film was directed by the Vasilyev brothers (who were not actually brothers but happened to share a last name) in 1934. It was loosely based on the eponymous novel by Dmitri Furmanov, which, in its turn, was based on real events. The action takes place during the Civil War when Vasily Ivanovich Chapayev was a celebrated Red army commander. In the film, he is portrayed as an honest and brave man, albeit somewhat simpleminded (he hesitates when a peasant asks him if he is for Bolsheviks or Communists and finally replies, ‘I’m for the International!’). Although his fuzziness in regards to the details of the Communist idea which he is fighting for makes one laugh, we feel sympathy for him when it is revealed that it has been only a year since he learned to read. His aide Petka and Anka the machine gunner are also charismatic relatable characters, and they always accompany Chapayev in all the new texts he appears in.

John Stachelski, graduate student in the department of Slavic Languages and Literatures, emphasized this ubiquity of Chapayev’s figure in Russian culture. As he pointed out, in the 70s Chapayev became a character in Russian jokes, which demythologized his heroic persona. In the Post-Soviet period, he is both mythologized and demythologized in Victor Pelevin’s 1996 novel Chapayev and the Void (published in English as the Buddha’s Little Finger) where he appears as a ‘hero who stands facing the existential void of the loss of meaning and meta-narratives following the fall of the Soviet Union.’  Thus, Chapayev as a character has really survived the crossing of the Ural river after being surrounded by General Borodin.

The series Red Century: Russian Revolution on Film will continue the next semester. The series is sponsored by the Russian Studies Program at the European Studies Council at the MacMillan Center; Whitney Humanities Center; and the Edward J. and Dorothy Clarke Kempf Memorial Fund. For information on upcoming screenings, visit: http://europeanstudies.macmillan.yale.edu/calendar

Written by Mariia Muzdybaeva, a graduate student in the European and Russian Studies Masters program.