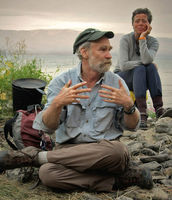 A number of images has lately been associated with Russia—invasion of Crimea, European energy security, election hacking— but “environmental protectionism” is not one of them. Spanning about 2% of the nation’s territory (an acreage equivalent to about 108 Rhode Islands), Russia’s vast network of nature reserves is its “best kept secret”, says Fred Strebeigh, Senior Lecturer at the Yale School of the Environment and at the Department of English. Russia has the world’s largest system of strict nature reserves and protected areas, categorized as “no go zones” by the International Union for the Conservation of Nature. The history of Russia’s nature reserves—or zapovedniki—says Strebeigh, is “a remarkably unknown story, including within the environmental community today.”

The story begins in the early 1900s, when Moscow’s biology professors began speaking of the need to protect areas of “primordial nature” before they disappeared due to human activity. In the early 1920s, the Moscow Zoo began training young biologists who would become leaders in the Communist conservation movement. Early success came in 1921, when Vladimir Lenin signed a decree that established the first zapovednik. “This was instantly pre-Soviet and proto-Soviet”, argues Strebeigh, as “even before consolidating power, Lenin received an argument from young naturalists arguing for the creation of a second zapovednik.” By 1933, there were 21 of them.

The 1940s saw a reversal of the conservation trend—to support his industrialization efforts, Joseph Stalin opened the zapovedniki to farming, logging, mining, and hunting, and cut the acreage under protection by 89% within a decade. When his successor, Nikita Khrushchev, similarly tried to convert some of the land into hunting zones, Soviet scientists and conservationists fought back.

In 1961, biology students at the Moscow State University organized in defense of the nature reserve system, calling themselves “Druzhina”. “How to describe the Druzhina? If Yale had a group called ‘Samurai for Nature Protection’, that would be Druzhina”, says Strebeigh. They served as volunteer firefighters, environmental educators, pollution protestors, and overall defenders of Russia’s wilderness areas. By 1980, there were 140 brigades around the country, its activists becoming leaders on university faculties and in environmental organizations and government ministries.

From the chaos that ensued after the collapse of the Soviet Union in 1991, the Druzhina emerged as a concentrated and determined force under the leadership of Vsevolod Stepanitskiy. Today, the Druzhina’s “official headquarters” are in a Cold War era bomb shelter in the steam tunnels under the biology building of Moscow State University, but their real home is about two hours north of the city in a protected area for migrating cranes.

The Druzhina maintain a presence in Russian universities and have engaged with the government on environmental questions, “picking up the slack created by an inefficient government system”. They have participated in protests (such as the 2010 Lake Baikal demonstrations), undergone legal training to acquire paperwork and authority for the arrests of poachers, and even engaged with President Putin, who Strebeigh described as a “naturalist macho phenomenon: collaring tigers, taking blood samples from polar bears, and flying with migrating cranes.”

Overall, the Druzhina’s relationship with the Russian government has been complex; on the one hand, they have been able to communicate with President Putin about the importance of preserving and expanding the zapovednik system. On the other, the Druzhina have been targeted by the 2012 “foreign agents” bill, and continue to face the possibility of arrest, or even death, for their activism. Stepanitskiy has repeatedly clashed with the government, publicly resigning from, and returning to, the Russian ministry three times between 1991 and the present. He resigned for a fourth time in April 2017 because of low salaries for rangers and commercial and military expansion into lands that are part of the zapovednik system.

Yet, even after resignation, Stepanitsky has remained active, running a blog on his activities and pushing for government legislation that would encourage the zapovedniks to open 5% of their territory to the public for non-intrusive exploration and re-connection with Russian nature. The Druzhina continue their efforts more generally, managing government officials, staging protests, and educating the population – all “in defense of a hopeless cause”. As they say, “nature everywhere needs its own people.”