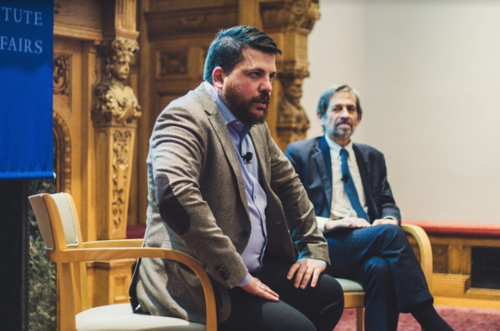 Leonid Volkov is a Russian politician of the Russia’s Future Party. Leonid was campaign manager and chief of staff for Alexei Navalny’s 2013 mayoral campaign for Moscow, as well as Alexei Navalny’s attempt to get registered for the 2018 presidential election. Currently, Leonid oversees all regional political operations of the Russia’s Future Party over Russia’s 11 time zones. Leonid is also founder of the Internet Protection Society, a NGO focused on internet freedom and digital rights in Russia. On October twenty-second, he spoke on “Russian Politics and the Strategy of the Russian Opposition.”

The talk, which drew a large crowd, was hosted by the Program in Russian, East European and Eurasian Studies and co-sponsored by the European Studies Council, the MacMillan Center at Yale and the World Fellows Program. Before Mr. Volkov began his address, he was introduced by Senior Lecturer in Russian and European Studies, Thomas Graham, who noted that Mr. Volkov has been deeply engaged with Russian opposition politics for many years. Indeed, Mr. Volkov has been active in politics for the past ten years, starting out as a deputy of the City Duma in his hometown of Yekaterinburg.

During his remarks at the event, the politician now most clearly associated with Alexei Navalny spoke about being a proud member of the opposition movement in Russia, which takes on different names — the Navalny team, the Anti-Corruption Foundation, or the Russia Future Party — depending on the circumstances.

“When we have to participate in an election, we are Russia’s Future Party,” Mr. Volkov said. “When we support Alexei in some anti-corruption campaign, we say it is a project of the anti-corruption Foundation. It’s not that important — it’s just the Navalny movement, the opposition movement in Russia.”

After joining this opposition movement in 2011, Mr. Volkov helped lead Alexei Navalny’s 2013 mayoral campaign for Moscow, as well as his attempt to get registered for the 2018 presidential election. He remains Navalny’s chief of staff and currently oversees all regional political operations of the Future Party over Russia’s 11 time zones, despite being some 5000 miles or so away at Yale.

Notably, Mr. Volkov studied mathematics and computer science and worked as an IT professional for several years before entering politics. During his talk, he noted that his background in IT serves him well in his current role as a political manager.

“We have to use internet technology in our political operations because we have no other way,” he said. “Since at least ten years we have been cut off from any mainstream media… and the internet in the last couple of years, mostly YouTube, remains the most important means of communication with the Russian voters and our supporters.”

Delving into the discussion of opposition politics in Russia, Mr. Volkov spoke about Alexei Navalny’s inability to get registered on the ballot for the recent 2018 presidential election in the country, which he said was entirely rigged, or “fake.” Still, he explained that the campaign succeeded in expanding the Navalny team’s political network and support base.

“The most important thing we did, and are continuing to do, is that we kept this network that we built alive,” he said. “Of course we had to scale down a bit as we rely completely on crowdfunding and micro donations… still we kept 45 of the regional offices open, so we have a political presence in any Russian city with a population over 500,000 and in some smaller cities as well.”

He added that these 45 regional offices — which he described as “points of crystallization for any kind of political activity” — operate under immense pressure, with regional coordinators often facing arrest or other forms of harassment.

With regard to the state of Russian politics in general, Mr. Volkov described the country in its current form as a “mafia state” with Putin as the “godfather” and his officials as his “lieutenants.”

“It’s a very personalist and authoritarian regime, based of course on corruption,” he said. “Russia is still a very rich country… and they are all dividing this pie somehow.”

Mr. Volkov added that while popular support for the nation’s institutions, such as the parliament, regional authorities, and the church, tends to be low, Putin himself has been an exception, drawing widespread support from the population for several years. However, since March 2018, Mr. Volkov explained, Putin’s approval ratings have been falling, leaving a state political system which relies entirely on his personal legitimacy in a precarious position.

“The average age of the member of the political elite is not changing… it’s about 45, 50 years, and it was the same 15 or 20 years ago,” Mr. Volkov said. “[These members] have started to think about the post Putin-Russia… about how to keep their assets, their position and their power after Putin. And the very successful re-election of Putin in March 2018 only ignited that way of thinking because now, the next re-election is in 2024, Putin will be 72 years old. The succession issue is on the table once again.”

Mr. Volkov went on to outline three possible scenarios for Russian politics going forward: Putin, who is now 72 years old, is able to remain in power for another twenty years or so, or until he dies; there is some dramatic event that ignites the crowds and leads to Putin being ousted; or, the political elite, beginning to view Putin as a lame duck, will no longer attempt to bolster his personal legitimacy causing the system to crumble.

“The good news is, in my opinion, whatever of the three scenarios happens, there is not much chance for those now in power in Russia to stay in power,” Mr. Volkov said.

He added that because the Russian state right now is built on personal ties between Putin and his lieutenants, the system is not really inheritable. Regardless of which of the three scenarios unfolds, Mr. Volkov said, once Putin is gone, his former lieutenants will really start to fight with each other, creating the perfect moment of opportunity for the Russian opposition.

“This will be exactly the time when we will just have to go out on the streets and demand a new system, a regime change, and a fair election,” he said. “Our chances will be good, because none of his lieutenants will be able to regain even ten percent of the power Putin has now.”

After he concluded his speech, Mr. Volkov opened the floor to audience remarks, which ranged from questions about the demographic make up of the Future Party’s support base, to queries about how the party would appoint people to government positions were it elected to power. With regard to the latter question, Mr. Volkov stressed that the system would be a meritocratic one based on open competition.

Though it did not feature heavily in Mr. Volkov’s speech, the issue of Russian foreign policy came up in questions from audience members, prompting the politician to explain that the opposition movement does not envision a Russia that is very active on the international scene and tries to “mimic a superpower.” With regard to the annexation of Crimea, Mr. Volkov said this issue will likely remain a “major problem for the next 50 years.”

The event, which took place in Horchow Hall, was part of a speaker series on Russian politics.