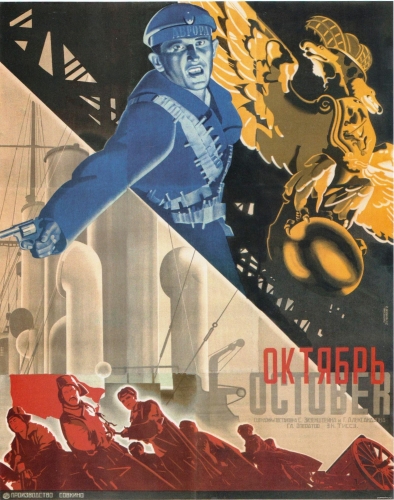 Red Century: Russian Revolution on Film series continued on Wednesday, October 4, with another work by Eisenstein––October (Октябрь, 1928, co-directed by Grigori Aleksandrov). October was one of the films made by Soviet directors to commemorate the 10th anniversary of the Revolution; however, it was released only in 1928. The film opens with scenes of the February Revolution and follows the events of 1917 towards the storming of the Winter Palace and the deposition of the Provisional Government. Although, as Professor John MacKay mentioned in his notes for the film, certain sequences from October “have entered into history as ‘documentary’ images”, the film is not always historically correct: for instance, the opening sequence of the mob toppling a monument to Alexander III is attributed to February of 1917, whereas it was destroyed only in 1918. (Inaccuracies aside, this scene certainly felt unexpectedly relevant in the present moment of the American history.)

The print (courtesy of the Museum of Modern Art) was almost two and a half hours long, which makes it a much longer version than those usually available. These two and a half hours-long recreation of the historical events of 1917 was filled with jokes and unexpected digressions: members of the Wild Division performing a traditional Caucasian dance; an elaborate 18th century automaton in the form of a peacock telling the hour; a girl from the Women’s Battalion observing Rodin’s Le Printemps, sighing.

The film was accompanied by Peter Krasinski, conductor, organist and music educator. He is the recipient of a number of prizes including the First Prize in Improvisation from the American Guild of Organists National Competition, as noted on his website, www.krasinski.org. The original score for the film written by Edmund Meisel was never fully restored, and the accompaniment the audience of the Whitney Humanities enjoyed was written by Krasinski himself. In fact, it was fully improvised: “I study the film and I try to memorize it the best I can,” the musician said when asked about his working process, and added, “I have always been an improviser.” For October, he used a keyboard, percussion instruments, and also incorporated into the score certain sound effects corresponding to the picture, such as sounds of a whistle or a telephone ringing.

After the conversation with Krasinski, Professor MacKay opened the discussion to the public. The audience commented on the clear misogyny of October, and noted implied queer motifs in the film. Professor MacKay also had a chance to talk about Eisenstein’s idea of intellectual montage, explaining the famous “For God and Country” sequence.

The series Red Century: Russian Revolution on Film is sponsored by the Russian Studies Program at the European Studies Council at the MacMillan Center; Whitney Humanities Center; and the Edward J. and Dorothy Clarke Kempf Memorial Fund. For information on upcoming screenings, visit: http://europeanstudies.macmillan.yale.edu/calendar

Written by Mariia Muzdybaeva, a graduate student in the European and Russian Studies Masters program.