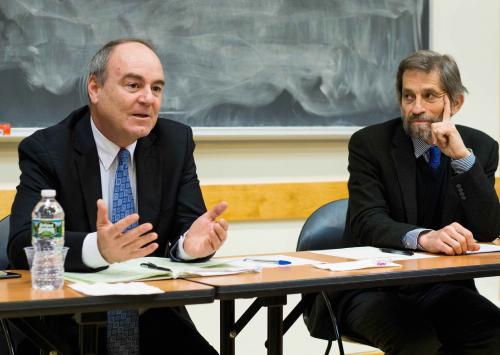 On March 18, in a landslide victory of over 76 % of the votes, Vladimir Putin extended his time in office for another six years. Thomas Graham, Senior Lecturer in Russian & European Studies at Yale, and Stephen Hanson, Visiting Professor of Russian & East European Studies, came together on April 3 to discuss what this victory meant for Russia and the world. Douglas Rogers, Associate Professor of Anthropology at Yale, moderated the discussion titled “Russia’s 2018 Presidential Elections: Lessons and Analysis.”

“Do elections in authoritarian regimes that are completely and thoroughly predictable matter? I argue that they do,” stated Stephen Hanson in his opening remarks. Drawing on Henry Hale’s theory of patronal politics, Hanson argued that elections in Russia are held to re-energize power pyramids and to signal who is the “big boss.” That being said, Vladimir Putin could have chosen other ways to demonstrate his political dominance—stop holding elections altogether and declare himself president for life. So how do elections in Russia, marred by fraudulent tactics and a lack of competition, help build political legitimacy?

The issue of Putin’s legitimacy is especially perplexing because Russia’s regime does not fit neatly into any of the three classic Weberian types: rational-legal, traditional, or charismatic. Though Putin does have an aura of a “father to the nation,” he falls short of declaring himself a tsar, and no one in modern Russia would take such a possibility seriously. Putin also vehemently opposes the charismatic type of legitimation, which for him is the synonym of destruction (Notably, there was no commemoration of the 100th anniversary of the October Revolution in Russia carried out by the textbook charismatic leader Vladimir Lenin.) The rational-legal authority is also out of the question, given the Russian people’s skepticism of Western-style institutions. The memories of the 1990s, when democratic reforms led to chaos, are all too clear in Russians’ collective memory. Lacking the Weberian types of legitimacy, the regime opts for what Stephen Hanson refers to as “plebiscitarian patrimonialism,” best described as “a mixture of plebiscitarian elections and a patrimonial-style rule.”

Hanson does not expect this system to sustain itself for long. For reasons including Putin’s age, state corruption, Navalny’s opposition, and the hardships associated with recruiting new forces, Stephen Hanson predicts an uproar when Putin’s legally allowed time in office comes to an end: “I expect a lot of drama.”

Because of clear expectations regarding the president’s role, Thomas Graham predicts a stable transfer of power from Putin to his successor. The key issue will be “finding younger individuals who are able of managing the system after Putin steps down.” A common mistake when analyzing Russia’s politics, believes Graham, is associating successorship with a single person, when it is actually a generational issue. Putin’s success in creating a new generation capable of perpetuating the system will determine the future of Russia’s political regime.

Another hot topic was that of the recent poisoning of a Russian double agent Sergei Skripal in the UK. Whether it was ordered by Putin or carried out by someone aiming to impress the president, it was sanctioned by the state, believes Hanson. State-ordered assassinations of a journalist Anna Politkovskaya and a former secret agent Sergei Litvinenko in 2006 testify to the high probability that Skripal’s poisoning was also the regime’s doing. While Graham agreed, he pointed out that the exact way in which the president was involved mattered. His bet is that the poisoning was a “standard operating procedure”, meaning that the government had passed down rules on how the secret services should operate in certain situations—and killing traitors was one of these rules. For him, this distinction is instrumental in shaping future relations with Russia. “I hope that we modulate the response based on the evidence that we have,” said the professor.

In light of these issues, how should the United States shape its relations with Russia? For Stephen Hanson, America’s closer ties to Europe are a prerequisite. “If we are thinking about the ideal American foreign policy, we would want first to restore normal state-to-state relations with Russia to do deals in such areas as anti-terrorism, nuclear security, and space exploration. But to get there, we also need some kind of transatlantic solidarity, so that we are not dealing on a state-to-state basis in a world of anarchic state competition, a world of pure realism,” he explained and added, “Working on the bilateral relationship first may be antithetical to the goal of a union with Europeans.”

Thomas Graham disagreed on the order of these two policy objectives, claiming that the U.S. government was capable of cooperating with Russians and Europeans at the same time. More importantly, however, is working on internal issues. “Getting your own society in order is a fundamental condition for being able to deal with the Russians effectively. Many of the problems we face are actually of our own making and have to be solved within our own country. I think that the emphasis on what the Russians are doing and whether the Russians are interfering, distracts a lot of attention from more fundamental challenges we face and absolves ourselves from responsibility.”

Written by Irina Bakhareva, a graduate student in the European and Russian Studies Masters program