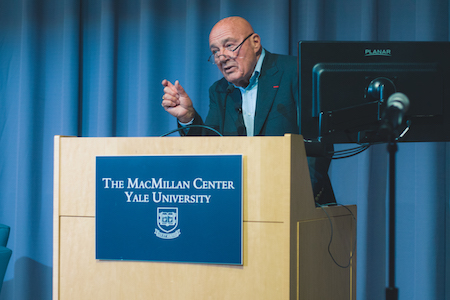 On a crisp winter day in December 1991, presidents of the three still remaining country-pieces of the slowly disintegrating Soviet Union—Russia, Ukraine and Belarus, met in the Belovezhskaya forest in the heart of Belarus to sign the accords disbanding the Union. After decades of the Cold War, the atmosphere on both side of the Atlantic was one of mixed joy and caution. Overnight, the United States was faced with an unusual challenge of giving course to its foreign policy towards this brand new entity called Russia; there was no longer a known soviet foe to rally against. “Not so long ago, we were all very optimistic—we’re going to be friends!”, reminisced the Russian-American journalist Vladimir Pozner to standing-room-only crowd at Yale’s MacMillan Center, “what has changed?”

On September 27, Vladimir Pozner was hosted by Yale’s Program in Russian, East European and Eurasian Studies, the Poynter Fellowship for Journalism, and the Office of International Affairs for a talk titled How the United States Created Vladimir Putin. In his opening remarks, Prof. Constantine Muravnik, Sr. Lector in Slavic Languages & Literatures at Yale, said that Pozner “needs an introduction only for those who are too young to remember the 80s and the 90s”. Throughout his long career, Pozner regularly appeared on, among others, Ted Koppel’s show Nightline, co-hosted the Pozner/Donahue roundtables, hosted the nearly legendary U.S.-Soviet space bridges that connected American and Soviet publics, shot a travel documentary series aired in Russia, and since 2010 has been hosting his own talk show Pozner on Russian Channel 1, where he sat down with personalities including Hillary Clinton. He has become a public intellectual, speaking up on a wide array of topics in and beyond U.S.-Russia relations with his characteristic wit.

In his talk, Pozner discussed the role that the U.S. foreign policy played in the early days of sovereign Russia. Following the collapse of the USSR, the initial mood in the newly established Russia was optimistic; when the president Boris Yeltsin addressed the U.S. Congress in June 1992, he proclaimed “the people of Russia are offering their hand to the people of the United States. In friendship, to build a better world.”

It is hard to envision this speech could be delivered in earnest today: “we are at an extremely dangerous moment. Never have the relations between Russia and the United States (…) been at this level”, said Pozner, and added: “during the worst times of the Cold War, when I was living in the Soviet Union (…) Russians were anti-White House, anti-Wall Street, but never anti-American. In fact, there was a warm feeling vis-à-vis Americans. Today that’s different. Today it’s anti-American at the grassroots level, and there’s a reason for it.”

Pozner was referring to what Russia sees as a broken promise. According to transcripts of high-level meetings, in early 1990 U.S. leaders made Gorbachev an offer—the then-Secretary of State James Baker suggested that in exchange for cooperation on the reunification of Germany, U.S. could guarantee that NATO would not expand “one inch eastward,” that is, will not bring into their ranks the former Soviet satellite states. Then, in 1996 the decision was taken to enlarge the NATO by Poland, the Czech Republic and Hungary; Pozner quoted from the journalist Thomas Friedman, who of this event wrote: “I think it is the beginning of a new Cold War. I think the Russians will gradually react quite adversely and it will affect their policies. I think it is a tragic mistake.” Pozner argued that the NATO enlargement into the former Eastern Bloc, and the embitterment of the Russians when they realised the promise was not kept, is what started the spiral of mutual distrust we observe today.

After in 2000 Putin first took office, his lack of success in seeking cooperation with NATO and the EU further contributed to the Russians’ sense of bitterness, anger, and loss of relevance that began to inform Putin’s foreign policy. Pozner recalled a 2017 speech in which Putin said of those first formative years of the cooperation: “Our biggest mistake was that we trusted you too much. You interpreted it as a weakness and exploited that.”

The rare animal of independent journalism

Pozner also stressed the destructive role media on both sides of the Atlantic play by escalating the mutual dislike and fear. “Russian mainstream media (…) shows an extremely negative picture of the United States,” he stated while pointing to the levels of government control, before adding, “but much to my surprise, American media is doing exactly the same.” He argued that while the U.S. can pride itself on its free media vis-à-vis Russia, the consolidation into conglomerates in the U.S. journalistic landscape led to mainstream outlets being confined, or “censored”, by corporate interests. “The fact that we do not question our media is quite interesting”, he deplored.

“I don’t represent anybody or anything. I am an independent journalist,” Pozner stated firmly, “that is a rare animal that is disappearing”, he added. Pozner is not without a flaw, however—there is no shortage of critics who point out that his own journalistic career started in a disinformation department of the KGB and later worked for a “propaganda radio”, and that many of his opinions on Russian affairs are controversial in the West. Pozner himself openly refers to this inglorious line in his biography.

Russia in the world today

When asked about the alleged Russian interference in the 2016 U.S. election, Pozner described the choice between Clinton and Trump, as one between someone who said that “Putin has no soul” and compared him to Hitler, and someone who said “I can work with this man. Now, yes, the Russians wanted him to win.” Pozner argued that if the interference in the election did occur, which he thought likely, it was too insignificant in scale to sway the election. Pozner was also inquired by the audience on the recent Helsinki Summit; “even if it was for show, it was good,” he replied. “Nothing was really achieved, but (…) the two man seem to like each other.” And that is very important, he believes, as a first step to achieve better cooperation.

For an hour, Pozner continued to respond to challenging questions on issues such as Russia’s annexation of Crimea, recent political developments in Armenia and Georgia, and the poisoning of Skripal in the United Kingdom. At the very end, a woman of Russian origin who has lived in the U.S. for a few years asked Pozner how he perceived Russia’s future: “Should we hope for anything better? Or should we just practice our American accents and forget about it?” In response, he pointed to the fact that Russian political elites are all people who have been shaped by the mentality of the Soviet era, “formed by a system that no longer exists”, and that with a new generation, a change will organically, inevitably come along.