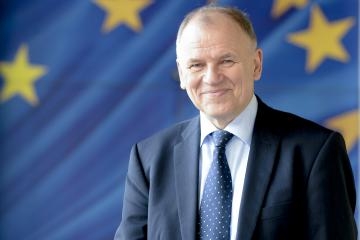 Vytenis Povilas Andriukaitis, the EU Commissioner for Health & Food Safety, spoke about European memories, his perspective on national and Union politics, and his hopes for Europe’s future at the MacMillan Center on September 28 during a lecture hosted by the European Studies Council. (view lecture)

Dr. Andriukaitis was appointed the European Commissioner for Health and Food Safety in November 2014. He was born on August 9, 1951, in Kyusyur in Siberia, where his family was sent to in 1941 from Lithuania. When asked if he remembers his days in the Gulag, he said: “Of course I remember it — Barracks, barracks, barracks… it was very simple.” Between 1941and 1955 his family lived in “terrible conditions,” Dr. Andriukaitis said. But he added that “it didn’t feel tough because it was the only life I knew.” He recalls meeting anti-Soviet exiles from different places who kept the sentiment of resistance alive as they passed it on to their children.

When his family was finally given the chance to return to Lithuania, Dr. Andriukaitis recalls facing the new challenge of being an outsider in a predominantly Soviet society.

“They asked me [to join their youth organization]. I said no,” he said. “It was not so easy… Other children [had membership]. I was the one who [did not]. But my achievements were, absolutely, on the highest level.”

To strengthen his ability to argue and counter increasing pressure from Soviet authorities and sympathizers, Dr. Andriukaitis turned to the study of history and acquired a second degree from Vilnius University; his first was in cardiovascular surgery. Since 1969 he was active in anti-Soviet underground movements and became involved with the underground Antennas Strazdelis humanitarian thought and self-education University. As a result, Dr. Andriukaitis  became the target of KGB surveillance and was, at one point, incarcerated along with some of his friends. Still, he shared his experiences dealing with the KGB in a relaxed and somewhat playful tone.

“They let us go… because we explained, [all of it was] cultural activities,” he said. “[I would] quote in Marx and ‘confuse’ the communists.”

Dr. Andriukaitis recalled the events of 1991, the year the Soviet Union agreed to grant independence to Lithuania after several months of protests, with joy.

“People were so positive. I was in front of our radio (tv) tower… 2.5 million [people] were on the streets… there were big demonstrations,” he said. “[The] unity of the nation was so high, so high, you can’t imagine. [There was] no fear, no fear [on people’s minds]. Tanks [were brought in] but people were blocking, pushing them with their hands. Soldiers were confused. People were dancing around and singing. There was no fear. It was our time, our victory.”

Despite initial jubilation, however, Dr. Andriukaitis explained that the unrest leading up to independence led to the fragmentation of Lithuanian society.

“Then came a time of difficulty,” he said. “There’s a term called ‘constructive destruction’ — [it led to] a crash of social standards.”

Dr. Andriukaitis was deeply involved in the newly formed Lithuanian government. He was elected to the Supreme Council of the Republic of Lithuania which preceded Seimas (Lithuanian Parliament), and was a co-author and a signatory of the Independence Act of Lithuania on 11 March 1990.

“It was a very, very difficult time, between 1993 and 1997,” Dr. Andriukaitis recalled. “The main hope was to join the EU. [We thought that] if we can join and achieve the structural support of the Union, [we can] restore our living standards.”

Lithuania joined the EU in 2004, an outcome which Dr. Andriukaitis played a leading role in delivering as a Chairman of the committee on European Affairs. In the following years, Dr. Andriukaitis continued to serve his country, as a member of the Foreign Affairs Committee; as Vice- President and later President of the Social Democratic Party; and as a Deputy Speaker of the Parliament. He was also the Head of the Lithuanian delegation to the Convention on the Future of Europe. His focus on health and food safety began with a post as Minister for Health in the Lithuanian Government between 2012 and 2014. And in 2014, he was appointed the European Commissioner for Health and Food Safety.

“I’m very happy that I am Commissioner now,” Dr. Andriukaitis said, adding that “it’s a very difficult time for [the] Union.”

He cited Britain’s recent decision to leave the EU and large scale movements of refugees as potential challenges to the European vision. He also recalled what it was like working with the EU during the 2008 economic crisis and the 2013 horse meat food fraud scandal and concluded: “Just one scandal can diminish people’s trust. People’s impressions are shaped by negative issues. But we are capable of addressing these issues, and we have constructed a working system. We are proud that we have many challenges [as we’ve overcome it all, we say] ‘Look, and we survive!’”

During a Q&A session that followed his lecture, the audience asked the Commissioner if Lithuanians were united because of the presence of common external enemies.

“No external enemies, but a number of big friends: Kazakhs, Lithuanians, Russians, etcetera,” Dr. Andriukaitis responded. “It’s very painful for me to say [that] now we lost many friends. My generation was industrial, with deep crises and fragmentation in economic aspects. Now you are working on temporary agreements, [it is] no longer an industrial society [with] large trade unions. However, the language of Cold War continues to exist, which to me is a bit strange. It’s very necessary to go out of [this] old misunderstanding, go out of Cold War.” With regard to his personal identity, the Commissioner claimed that he has always thought of himself as European.

“Walls never replace bridges,” he said. “It’s better to build bridges. We now have some claiming their country to be first. I don’t know which country should be first. For me it is more interesting to see solidarity. Sustainability requires new mechanisms. It’s time to rethink.”

The talk was moderated by Bradley Woodworth, Coordinator of Baltic Studies at Yale University and David Cameron, Director of the EU Studies Program and Professor of Political Science. The event was cosponsored by the European Studies Council’s programs in EU studies and Baltic studies, and the Office of International Affairs.