Event Recap: Without the Banya We Would Perish, A History of the Russian Bathhouse 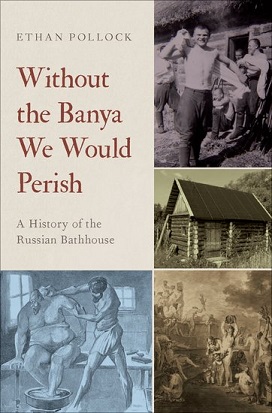 On October 31st, the European Studies Council hosted Ethan Pollock, an Associate Professor of History and Russian Studies at Brown University. Dr. Pollock gave remarks on the history and culture of the banya, or Russian bathhouse, based on his recent book Without the Banya We Would Perish: A History of the Russian Bathhouse.

Dr. Pollock’s research was inspired by the story of former Russian Prime Minister Boris Yeltsin. Before becoming prime minister, Yeltsin visited the banya in different parts of the Soviet Union – Russia, Central Asia, the Baltic States, and Ukraine. At odds with the party and openly critical of Gorbachev’s reforms during this time, Yeltsin “found himself depressed and isolated and uncertain about what his political future would be.” The banya offered a space for discussion outside the political realm, where Yeltsin gained new sources of support and a new understanding of his identity. According to Dr. Pollock, “[Yeltsin] went into the banya as a communist, [and] came out as a Russian nationalist.”

During his talk, Dr. Pollock discussed the question of how exactly the banya could act as a setting for radical change. The banya was not simply a place to get clean. It played a central role in Russian social life. “Not a single Muscovite could abstain from the banya,” shared Dr. Pollock. Whether he was “a master of trade, a poor man, an aristocrat, a rich man,” no one “could live without the commercial banya.” The banya’s role as a public and communal space crossed religious lines – Orthodox Christians, Jews, Muslims went for “wedding rituals, to give birth, to ward off evil,” and more. “Everyone claimed it as their own.”

Beyond the strictly communal aspect, the banya offered a type of spiritual promise to bathers.  It was considered “a place of rebirth, renewal, honesty, and openness.” People would go “to feel purified, both literally and figuratively. In a way, it was like the people’s church, a sacred space that was evoking salvation.”

Dr. Pollock’s research took him to the archives in Moscow and St. Petersburg; libraries in Russia, Finland, and the US; and on trips to the banya. In his lecture, he shared the shifting perceptions and meaning of the banya in the West and in Russia. For example, for centuries the banya was considered an institution and was taken for granted by the Russians; “the idea that the banya would exist seemed to be essential and natural.” During this time, foreigners considered it a “sign of barbarism, backwardness, exoticness, and difference.” However, as bathing became more common practice in the West, Westerners began to see the banya as something progressive, while the Russian elite came to think of it as primitive.

The vital role of the banya to Russian social and cultural history is captured in the title of Dr. Pollock’s most recent book, which references one of many common sayings that date back to the 1700s, such as “elixirs are good, but banyas are better” and “without the banya, we would perish.” Dr. Pollock’s lecture was followed by a Q&A session on the banya’s role in Russia and the world.