Film Review: Getting to Know the Big, Wide World 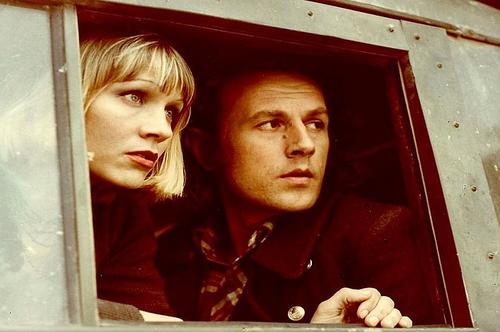 A review of the fourth film of our fall series, “The Long Farewell: The Films of Kira Muratova,” by Spencer Small, Slavic Languages and Literatures.

Getting to Know the Big, Wide World  (1978) is Muratova’s first film after a seven year ban on film making marked her brief departure from the Odessa film studio and exists as her only collaboration with the Leningrad based studio,  Lenfilm. The film’s release was quite troubled, as it was given very limited distribution and according to Muratova, “only six prints were made.”[1]

Of note, this is also Muratova’s first color film and marked the beginning of what Muratova herself would coin as her “ornamental phase.” Muratova’s move to color film is striking, especially considering the seemingly monochromatic aesthetic — the film is saturated with browns and greys, with only brief flashes of vibrant color. At this point in the history of Soviet cinema, color film was already standard, so it would seem that her use of a relatively monochromatic colorscape is a response to color film technology and functions as a statement that rejects an over reliance on aesthetic stimuli. However, this would not be achievable in the same way if Muratova were to have filmed this picture in black and white, which by this point could already be seen as an explicit aesthetic statement (such as Larisa Shepitko’s film The Ascension released the year prior).

Getting to Know the Big, Wide World is difficult to pin down generically —  one might be tempted to reductively label it a provincial melodrama, or a story of a love triangle. However, as with much of Muratova’s oeuvre, Getting to Know the Big, Wide World, is difficult to reduce given its artistic statements. Although the film’s screenplay, which is based upon a scenario by Girogi Baklanov that largely conformed to Socialist Realist devices, Getting to Know the Big, Wide World rejects Socialist Realist aesthetics and plot contrivances (despite its clear allusions to Socialist Realist art — Fedor Gladkov’s Cement comes to mind), and grounds her narrative in psychologically and emotionally rich content. Despite this, Muratova defended her films, stating in an interview that her work is Soviet, demonstrating that her films depict reality in a very positive, realistic and optimistic way, despite criticism stating that her films were gloomy and distorted Soviet reality (a criticism that was, according to 2012 interview, particularly salient while she was making this film).[2] She emphasizes individuals set within the collective - this is evident both in the privileged characterization of Liuba (played by Nina Ruslanova, who had collaborated earlier with Muratova in Brief Encounters), Misha (Sergei Popov), and Nikolai (Aleksei Zharkov), as well as in the film’s symbolic materialism, such as Misha’s gift to Liuba, a clay vase that recalls the artist’s individuality set amongst the collective labor occuring on the construction site.

Muratova herself stated in an interview that the construction site is a location rarely aestheticized in film, with the notable exception being Dziga Vertov.[4] For Muratova, this setting was emblematic of the aesthetic of beginnings, this is a space in which rules are yet to be established — a space that, through its ugliness, emphasizes moments of beauty within.[5] In many ways, the staging of the film functions in a theatrical mode. In one scene we see Liuba illuminated by the headlights of Misha’s truck, functioning as a pair of spotlights, allowing Liuba to reenact (or rehearse) her blocking in preparation for meeting with Misha — this, as well as other moments of repetition of movement and dialogue function as visual rhyme. Here Muratova is using cinema as a vehicle through which she employs a type of visual poetics.[6] Furthermore, we see that Muratova was thinking in terms of the theatrical with regards her philosophy on editing and montage, which she referred to as dramaturgy, not the dramaturgy of words, but the “dramaturgy of editing.”[8] Through her unique style(s) of montage, Muratova not only complicates the viewer’s positionality vis a vis the film, but also the characters’. Misha almost seems to be aware that he is watching a performance — one that he hesitantly participates in, while simultaneously remaining conscious of the theatricality of his surroundings — until the very end of the film, when he is seen confessing his love to a bewigged Liuba, and ultimately becomes a (willing) participant in the theatrical.