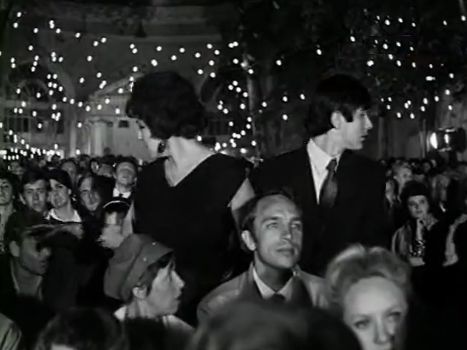 A review of the third film of our fall series, “The Long Farewell: The Films of Kira Muratova,” by Valeria Mutc, Slavic Languages and Literatures.

The film presents a story of a single mother, Evgenia, and her teenage son, Sasha, who live in a one-room apartment in Odessa. Sasha is planning to leave Evgeniia and move to Novosibirsk to live with his father. The title of the film in Russian, Долгие проводы, is actually a part of a longer saying, Долгие проводы – лишние слезы, which roughly translates to “long partings (long goodbyes) cause unnecessary tears.” This saying originally referred to women seeing their men off to war; thus,  from the title of the film, one could assume that the film privileged a female perspective. However, The Long Farewell paradoxically flips the meaning of this saying, attributing it both to the mother and the son, and questioning the inevitability of their goodbye.

The Long Farewell was finished in 1971 and was immediately shelved for almost sixteen years, censored for its “incompatibility with the aesthetic canons of Socialist Realism” and its director’s “evident political unreliability.”[1] It was only in 1986 that the Union of Soviet Filmmakers brought off the shelf Brief Encounters and The Long Farewell. Both films caused a sensation, praised by critics and spectators alike: the films did not seem dated, despite being shelved for almost two decades.

One of the ideas that the censors objected to, when reading the screenplay, was the juxtaposition between the intelligentsia and the people. In the original script, Sasha wanted to escape from his mother, who was a typewriter without higher education, to his father, an archeologist and a professor in the “city of science,” Novosibirsk. Even though it was changed later and Evgeniia became a highly-educated translator, censors still saw the discrepancy between provincial Odessa and scientific Novosibirsk, and read Sasha’s desire to escape from his hardworking mother to a highly intellectual father as an attempt to degrade a simple worker.

In the final version of the film, however, Sasha’s escape outlines not a social opposition, but a gendered one: he is looking to distance himself from the influence of his mother and to grow similar to his father is. The portrayal of Evgeniia originally supports this line of Sasha’s development: Evgeniia is often presented as voiceless, only capable of repeating the words of others (often men). She is a professional translator, literally interpreting someone else’s words. In the remarkable scene at the train station, she is incapable of writing a telegram herself, but writes down the letter of a stranger, as he dictates it to her. We often catch her in the “feminised” act of trying on different masks – she is putting on make up in front of the camera and wearing wigs. As was noted by a number of scholars, she is oscillating between different roles, dictated by society – the daughter, the woman, the translator, and the mother. In Zinaida Sharko’s outstanding performance in the scene on the cemetery, we can see Evgeniia switching between two roles: her heroine transitions from a daughter with shaking hands and a somewhat naïve look to an impatient and demanding mother in the span of two seconds.

It is often argued that in the process of trying on masks and “making herself up,” Evgeniia loses sight of her own identity. However, despite switching between different masks, Evgeniia is the only character who is actually grounded in her surroundings. Men only exist in images, be it a portrait on a tombstone or a projection on the wall. Even though Evgeniia tries on different masks, she gets to remove them by the end of the film, as she is removing her wig.

The ending of the film has elicited very different responses in the critics and scholars. Some read it as a fight of a woman to occupy the “place,” that was taken from her by a man.[2] Others concentrate on Sasha’s discovery of a vulnerable and lonely soul in his mother.[3] An interesting interpretation is suggested by Mikhail Iampolsky, who views the film as Evgeniia’s journey from acting to spectatorship, suggesting that the moment when Evgeniia starts to spy on Sasha, she becomes a voyeur and gains a sense of distance from her son for the first time, prompting her growth as a character.[4] According to Iampolsky, the final scene, in which Evgeniia is so eager to assume the position of the spectator at the concert, highlights her emotional development and a newly-found sense of self. Sasha, on the contrary, goes from seeking distance, which is emphasised by the romantic notion of moving to Siberia, to “grounding” in the here and now.[5] Every interpretation ultimately suggests that the film’s main goal is to explore the emotional potential of both Sasha and Evgeniia, and it is in this exploration that the questions of self-identity and separation become especially significant.