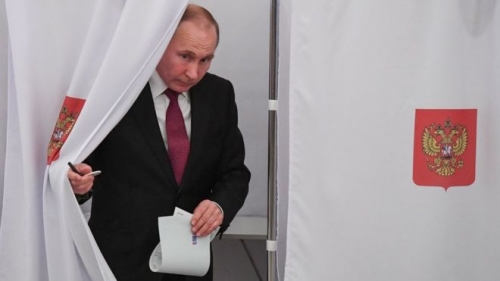 To no one’s surprise, on Sunday Vladimir Putin was reelected to a fourth term as president of Russia. Originally scheduled for March 11 but rescheduled last year to March 18 to coincide with the fourth anniversary of the annexation of Crimea, the election produced the expected landslide for Putin against token opposition from seven other candidates approved by the Central Election Commission.

According to the final official results, Putin—who received 53 percent of the vote when he was elected to his first four-year term in 2000, 72 percent when he was reelected in 2004, and 64 percent when he was elected to a six-year term in 2012 to replace Prime Minister Dmitri Medvedev, who had swapped places with the term-limited Putin in 2008—won 76.6 percent of the vote on Sunday. His nearest competitor, Pavel Grudinin, a director of a large agricultural company running as the candidate of the Communist Party, won 11.8 percent. The next closest candidate, Vladimir Zhirinovsky, the leader of the Liberal Democratic Party of Russia—a party that, notwithstanding its name, is on the nationalist right wing of the party spectrum—won 5.7 percent. Ksenia Sobchak, a television journalist and daughter of Anatoly Sobchak, the mayor of St. Petersburg in the early 1990s and Putin’s first patron after he returned from his position with the KGB in Dresden in 1990, won 1.7 percent and each of the other four candidates won less than 1 percent of the vote. Putin, who celebrated his 65th birthday last October, will serve as president until 2024—unless, of course, Russia does what China just did and amends the constitution to lengthen or remove altogether the limit of two consecutive presidential terms.

While Putin won a larger share of the vote than either he or Medvedev had in the four previous presidential elections, the magnitude of the victory was diminished by a turnout that, despite the very considerable efforts of government officials to induce people to vote and to pad the results, was less than the 70 percent set by the government as the target prior to the election. As a result, while Putin won 77 percent of the vote, with a turnout of 67.5 percent that represented only 52 percent of the electorate. In other words, almost half of the Russian electorate chose either to vote for someone other than Putin or not to vote at all.

But the most important factor diminishing the magnitude of Putin’s victory, of course, is the fact that the Central Election Commission rejected 17 individuals who applied to be officially registered as a candidate, including one, Alexei Navalny, who in all likelihood would have attracted a substantially larger share of the vote than any of the seven candidates allowed to run against Putin. Navalny, a lawyer, anti-corruption activist, and outspoken and frequently-arrested opponent of the Putin regime, was banned on the grounds he had been convicted and given a suspended sentence for allegedly embezzling lumber from a state company. Both the European Court of Human Rights and the Russian Supreme Court reversed the initial decision in the case on the grounds he didn’t receive a fair trial. But a lower court subsequently reimposed the suspended sentence and the Central Election Commission rejected his candidacy for that reason.

Over the past 15 years, scholars have noted the widespread existence of “hybrid” regimes that combine formal democratic institutions, including elections in which multiple parties or candidates compete, with authoritarian modes of governance that do not allow citizens the full array of rights and liberties that are foundational for a democracy. As elaborated by Steven Levitsky and Lucan Way in an influential 2002 article in the Journal of Democracy and subsequently in their book entitled Competitive Authoritarianism: Hybrid Regimes after the Cold War (Cambridge University Press, 2010), the incumbents in such regimes violate the rules so frequently that they fail to meet the conventional minimum standards of democracy. Yet, despite the abuses, the regimes retain the formal institutions of democracy—most notably, elections in which parties and/or individuals compete for votes—as the principal means by which political authority is obtained and exercised. Russia under Putin exemplifies, they argue, this hybrid of competitive electoral politics and authoritarian governance.

As useful as the concept of competitive authoritarianism is for understanding the apparent incongruity of democratic electoral procedures and authoritarian governance, it seems obvious that Russia no longer is—if it ever was—a “competitive” authoritarian regime. It has quite clearly become, in the Putin years, a “pseudo-competitive” authoritarian regime. While there are elections and multiple candidates and parties, there are no opposition parties and candidates who have the slightest chance of winning the presidency or a legislative majority. And, as epitomized by the paltry performance of the candidates who ran against Putin on Sunday, the reason there are no opposition parties and candidates that have even the slightest chance of winning is because the regime has, over the last quarter-century beginning in the years when Boris Yeltsin was president (1991-99) and continuing to this day, deprived its citizens—in particular, of course, those who challenge the regime—of the political rights and civil liberties that are foundational for a democracy and without which political oppositions can’t challenge incumbents.

All of which is to say that, as was very apparent in Sunday’s election, Putin’s Russia is a “pseudo-competitive” authoritarian regime.

Written by David R. Cameron, a professor of political science and director of the MacMillan Center’s Program in European Union Studies.