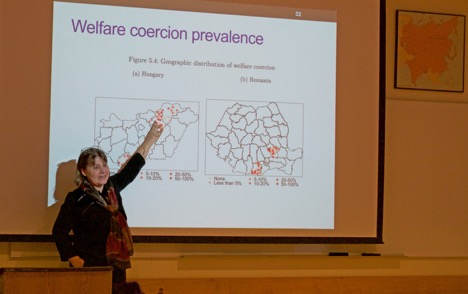 On February 17, the Russian, East European, & Eurasian Studies (REEES) Program at Yale welcomed Professor Isabela Mares to discuss her latest book, Conditionality and Coercion. Professor Mares is the Arnold Wolfers Professor of Political Science and she has written extensively on a range of topics in comparative politics and political economy. Her new book, co-authored with Lauren Young, Assistant Professor of Political Science at the University of California-Davis, examines electoral clientelism in East European countries, specifically Hungary and Romania.

After an introduction from Douglas Rogers, Professor of Anthropology and Director of the REEES Program, Professor Mares began her presentation. She explained that her research aimed to understand the variation of clientelistic strategies and voters’ perception of such strategies. She highlighted several ways that her study “added to the existing literature” on clientelism: it expands the menu of clientelistic strategies to include coercion, reveals the heterogeneity within the poor population (“an intra-poor conflict”), and analyzes clientelism as a “signal” of policy positions.

Particularly, Professor Mares presented the combination of methodologies that she used in her research. To help voters overcome the fear of revealing unfavorable information about the election process, she worked with a group of anthropologists to employ a variety of non-obtrusive survey techniques, including ethnographic research, list experiments, vignettes, and conjoints.

Professor Mares went on to situate her research in the political context of Eastern Europe. She said that, in regions plagued by economic decline, deindustrialization, and rising unemployment, voters have to increasingly rely on social policy benefits distributed by mayors. She specifically mentioned the ongoing anti-corruption campaign in Romania. She warned that strict prosecution of vote-buying would only force political actors to choose less straightforward and less detectable forms of clientelism.

Throughout her presentation, Professor Mares showed graphs and statistical results of her research. She concluded that her research emphasizes the multidimensionality of clientelism, the importance of the poor-versus-poor conflict, and the way that voters’ social policy preference influence their evaluation of politicians. She expressed her hope to extend the scope of research to other countries.

A Q&A session followed the talk, where members of the audience were able to ask questions about specific methodologies and conclusions of Professor Mares’ research.