In Russia, it was encore after encore for the Yale Symphony Orchestra 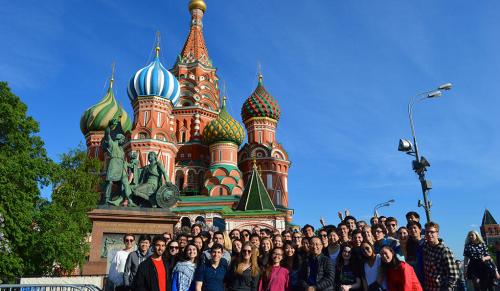 Before the Yale Symphony Orchestra (YSO) performed in the Great Hall of the Moscow Conservatory this summer during its first-ever Russian tour, music director Toshiyuki Shimada feared there would not be much of an audience.

The concert was scheduled for 3 p.m. in the afternoon, and some of Shimada’s friends informed him that concerts at that time of day were virtually unheard of.

“This is a huge and historic hall; it is the hall in Russia, where all the biggest artists have performed,” says Shimada. “Tchaikovsky himself played there. And a lot of people were saying, ‘Everyone is working at that time. Nobody is going to go.’”

However, at concert time, the nearly 2,000-seat hall was packed. The YSO performed Tchaikovsky’s Symphony No. 5, Bartók’s Piano Concerto No. 3 (with pianist and Yale faculty member Boris Berman as soloist), and Samuel Barber’s overture to “The School for Scandal.” Concertgoers responded to the performance in a manner that is customary for appreciative Russian audiences: clapping steadily in unison. Their enthusiasm was so great that the orchestra performed three encores. “They didn’t want to let us go,” says the conductor.

Shimada was both relieved by the full house and proud of his musicians’ performance, but became concerned yet again when several music critics wandered backstage following the concert.

“Traditionally, when critics come backstage to interview me, the review the next day is not complimentary,” the conductor says. “But all three of the critics asked the same question: How can an orchestra sound so good when so many of its musicians are not music majors? And the reviews were overwhelmingly positive.”

For example, critic Sergei Bulanov wrote in Music Life: “A burning desire to make music, a sincere love for it, are the key qualities of any musician, without which genuine art is impossible. And the Yale Symphony Orchestra again and again proves a shining example of this commonplace truth.”

During its four-concert tour of Russia, the YSO also played in St. Petersburg and in two historic riverfront cities: Veliky Novgorod and Yaroslavl. Critics, radio hosts, and audience members in each of the four cities repeatedly asked Shimada and Berman how the YSO — a group of undergraduate musicians majoring in fields as diverse as art history and physics, with only a handful pursuing music careers  — manages to perform at such a professional level.

The answer, says Shimada, is “because of the Yale students’ love of and passion for making music together.”

Berman, who grew up in Russia and is a graduate of the Moscow Conservatory, warned YSO members before the tour that they would be held to especially high standards in his native country.

“I told them: ‘Russian music education is very professional; young people who play violin are, as a rule, aspiring musicians. People who are not thinking about becoming professional musicians don’t play violin. The YSO will not be compared to a Russian equivalent of, say, an orchestra of MIT because the “Russian MIT” does not have a symphony orchestra. You will be compared to a Russian equivalent of the Julliard,’” recalls Berman.

The Yale students “definitely rose to the occasion,” he says.

The tour — held in the later part of May and early June — was made possible by donations from alumni and fans of the YSO, particularly Russian businessman Azamat Kumykov GRAD ’15, a fellow of Branford College who has served as a member of the International Advisory Council for the Jackson Institute of Global Affairs and has donated to several university initiatives. The YSO typically embarks on international tours every two or three years, but the opportunity to travel to Russia was especially exciting for the young musicians, says Brian Robinson, managing director of the YSO. He worked with Classical Movements, an international concert touring company, to plan the trip abroad.

“Russia has a rich classical music history, educated audiences, and wonderful concert halls,” Robinson says. “It was a welcome idea to travel to Russia, particularly with the current political climate, and to give the YSO an ability to reach out to a Russian audience from a purely cultural vantage point.”

Shimada says he carefully chose a musical program for most of the performances that included Russian and Eastern European musical masterpieces (Tchaikovsky and Bartók), as well as such encore pieces as Tchaikovsky’s “Waltz of the Flowers” from “The Nutcracker” and Soviet-Armenian composer Aram Khatchaturian’s “Gallop” from “Masquerade.”

“Some of my friends said, ‘Are you really going to play Tchaikovsky for a Russian audience?’” recalls Shimada. “I had faith that our students could play really well. And we wanted to show our own students that music could be understood by anyone in the world. Our Russian audiences appreciated our different interpretations.”

“It is a daunting task to bring another people’s music into their own halls,” notes YSO’s principal French horn player, Leah Meyer ’18. “But as classical musicians, we’ve all grown up on it: studying, internalizing, and experiencing it for years. So for me, this felt like bringing the music back home. After our concert in Moscow, both older listeners and young conservatory students came up and thanked us. In St. Petersburg, as we were leaving the building, we were met with another round of applause when we encountered audience members in the lobby. It was a great honor to play Russian music for a Russian audience, but the real reward was the warmth with which we were received.”

“[A] teenage Russian girl asked me for my signature as I was exiting from our dressing room in St. Petersburg,” he says. “The [audience] applause continued even after multiple standing ovations; Russians applauded us as we exited the halls to our buses (particularly in St. Petersburg). Playing music is always something that has made me feel joyful, and it was special to observe the audience share in that feeling. As I looked across the orchestra during our encores, I saw smiles all around.” 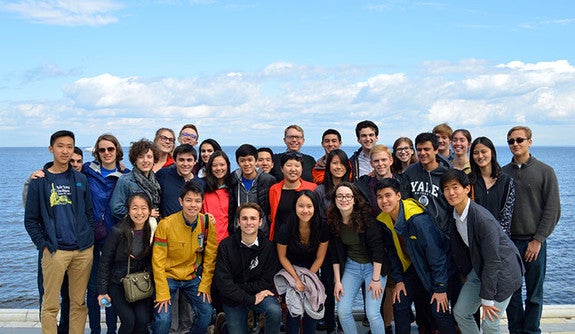 Some members of the Yale Symphony Orchestra are pictured during a tour of the Peterhof Palace in St. Petersburg. (Photo by Noah Stevens-Stein)

The tour also afforded the musicians some time to visit notable Russian sites, among them Lenin’s Mausoleum; the Church of the Savior on Spilled Blood; the graves of such Russian political, literary, and musical figures as Khrushchev, Stalin, Boris Yeltsin, Shostakovich, Prokofiev, and Dostoevsky; Winter Palace; Red Square; St. Basil’s Cathedral; and the Kremlin. Some students also made excursions to The Hermitage, the Bolshoi Theatre for an opera performance, and a jazz club in St. Petersburg, among other venues. Berman also treated a group of students to an impromptu tour of the architecture in Velisky Novgorod. Several students wrote blogs about the tour, which can be found at https://yalesymphonyorchestrablog.wordpress.com.

“Russia was the most amazing experience of my life,” says Stevens-Stein. “It is always special to visit another place, particularly with a group of talented musicians and great friends. However, Russia being so deeply entrenched with classical music history made the trip significantly more meaningful. We had the opportunity to visit Tchaikovsky’s grave in St. Petersburg; days later, his portrait would gaze down upon us as we played his Fifth Symphony in the Moscow Tchaikovsky Conservatory Bolshoi Zal. As an art history major, the opportunity to visit the Hermitage and State Pushkin and State Treyakov [galleries] was incomparable.” (He describes his reaction to seeing some artistic masterpieces in Russia on the blog site.)

For the YSO’s final concert, in Yaroslavl, the orchestra performed an all-American program, as requested by the audience, with very little time to rehearse. In fact, says Shimada, the musicians were playing some of the pieces, such as Leonard Bernstein’s overture to “Candide,” for the first time ever, with only 20 minutes of rehearsal time to prepare.

“Just as our other Russian concerts, it was a great success,” says Shimada.

The YSO conductor recalls having a very young girl approach him after the  first concert in Moscow to ask: “Do you love conducting?”

Shimada notes that the tour emphasized for him something he has always known but came to appreciate even more in Russia. “In spite of the difficulties they face in their country, the Russian people still love their life,” he says. “I learned that people really need culture — culture that speaks to their heart. It was wonderful that the YSO could offer that as a great gift.”

The YSO’s complete concert in White Hall in St. Petersburg can be found at https://www.youtube.com/watch?v=Q4-Wn0XgpD8&feature=youtu.be.