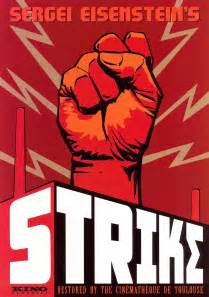 The Whitney Humanities Center Auditorium was full on the night of September 23 with 250 people who attended the screening of Sergei Eisenstein’s Strike (Стачка, 1925). The event, organized by the Russian Studies program at the MacMillan Center, was unique in that the film was accompanied by Alloy Orchestra’s live performance.

Strike was the first film in the series, Red Century: Russian Revolution on Film, dedicated to the centennial of the Russian Revolution. Indeed, there hardly was a better way to start this series than with the first full-length work by one of the most important directors and film theorists in the history of the medium, Sergei Eisenstein. The plot of the film is quite simple: the workers struggling with the factory’s administration, pictured as cartoonish capitalists, decide to go on a strike—only to make matters worse. The formal side of the film, however, is far more complex. As Professor John MacKay, who introduced the film and led the discussion after the screening, noted, Eisenstein had worked in theater before turning to film, and one can see the influence of his mentor Vsevolod Meyerhold on the acting style of the cast. Strike is full of so-called “attractions:” Eisenstein is famous for his experimenting with photography and editing. We see upside-down mirror shots, superimposed shots, photographic portraits that suddenly come to life and grimace at the viewer—the list could go on and on. There are hilarious fight scenes, dancing bears, and half-naked proletarians holding a meeting while bathing in a river. However, as entertaining as all these details are, they do not outweigh the cruelty of the film—some of it quite graphic. The 1917 Revolution left millions of people dead, and the final intertitles of Strike, which commemorate victims of worker uprisings all over Russia, turn the film into a tombstone of sorts.

The audience had a chance to experience Strike the way its contemporaries did—with live music. The accompaniment was provided by Alloy Orchestra, a three-man ensemble that specializes in writing scores for silent films and performing them live. Their official website, www.alloyorchestra.com, introduces them as “the best in the world at accompanying silent films”—a quote from Roger Ebert. After the credits rolled and the applause ceased, Professor MacKay started the discussion by asking the musicians about their working process. The score that they created and performed for Strike is not historical as there is no evidence left on what kind of music was used in Eisenstein’s times. But, the musicians stressed that they would not refer to the original music in any case: “We are trying to propel the film into the now.” The discussion then was opened to the public; it was clear that many viewers felt affected by the film. Replying to questions and comments from the audience, Professor MacKay elaborated on Eisenstein’s use of cruelty and manipulating techniques, and talked about the chronology of historical events and the context of the film.

The series Red Century: Russian Revolution on Film is sponsored by the Russian Studies Program at the European Studies Council at the MacMillan Center; Whitney Humanities Center; and the Edward J. and Dorothy Clarke Kempf Memorial Fund. For information on upcoming screenings, visit: http://europeanstudies.macmillan.yale.edu/calendar

Written by Mariia Muzdybaeva, a graduate student in the European and Russian Studies program.