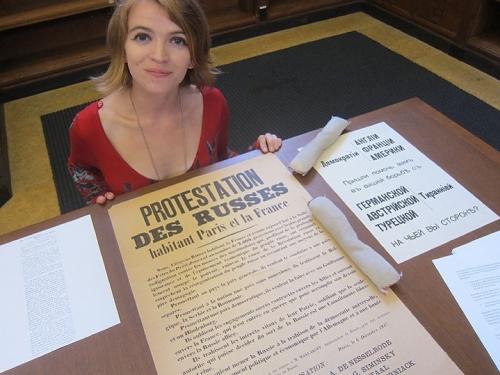 A revolution unfolded at Yale University. It took only two hours, but it achieved its aims.

The revolution in question was the 1917 Russian Revolution, a world-changing event the centennial and legacy of which were marked at Yale University Wednesday night through temporary displays at five university library locations.

What made the show about the revolution, well, revolutionary, was that it lasted for just for two hours. To see it you had to navigate, in a kind of academic version of a bar crawl, among five different library sites throughout the university, from Manuscripts and Archives and the music library near the main Sterling Memorial Library all the way out to the medical library on Cedar Street.

“In the spirit of revolution, I decided to do a one-day pop-up,” explained Librarian for Slavic and East European Studies Anna Arays. The event was advertised on the university’s calendar and Facebook and listserves. Members of the general public also were in attendance.

The pop-up was also born of necessity. Arays’s position had been unfilled for a couple of years, and when Arays arrived, there was not the two-to-three-year interval of lead time necessary to reserve an appropriate space and mount a full show.

Yet as Arays rushed from site to site Wednesday, she declared herself pleased with the unfolding result, as humanities and science people mingled and discovered what treasures the other’s archives possessed.

Many of the materials had not been exhibited in a decade, and some never before, Arays and her colleagues guessed.

Like this reporter, retiree Cynthia Parker was moved as much by the documentary items, such as sort-of-tsarist FBI-type dossiers of dangerous revolutionaries, complete with mug shots, and also, by the speeches of American socialists many of us had not heard of.

Take, for example, Rose Pastor Stokes. She was the wife of a very wealthy businessman, and together, they helped Eugene V. Debs and Upton Sinclair form the Socialist Party of America. Later she founded the Communist Party of America and traveled to the meeting of the Fourth Comintern in Russia as the American representative, monikered “Sascha,” where she specifically reported on the Comintern’s Negro Commission.

Among her utopian predictions captured in the documents on display: “It is necessary that the white Communist meet the colored Communist in a spirit of complete emancipation from color dogma. We must guard against the slightest misunderstanding on our part which might tend to prevent the fullest confidence and cooperation on the part of the enlightened representatives of the most oppressed portion of the world’s proletariat.”

“These people believed in what they said. This is so much from the heart,” said Parker. “Black lives matter,” she added.

Over at the Beinecke Rare Book Library, Curator Kevin Repp had taken out many rare items, including two books illustrated by influential Russian avante-gardist El Lissitzky

One was his illustration of the Aramaic/Jewish folkloric song, “Had Gadya,” or “Single Kid,” which appears in the Passover Haggadah and in a rare lithographic book of 1919.

Repp pointed out how the Hebrew letters Lissitzky employed were elongated from the traditional lines of his previous work illustrating Yiddish poets, turning into the constructivist style — as in his 1923 illustration of a book of poems by Vladimir Maykovsky.

“The Russian avant garde of the 1920s were masters of layout and design” and have had huge influence on designers and architects today, said Repp. These items are frequently looked at by architects, architecture historians, and others in the Yale community.

On this day they were open to the public. Of the Had Gadya, Repp said it was representative of the flowering of Jewish literature between the fall of the Romanov monarchy in Russia and the solidification of power by the Lenin and the Soviets in the mid-1920s. The Had Gadya is one of only three copies known to be extant in the world, he added.

Closer to home, and back over at Sterling, Arays explained that she and her colleagues were not sure how much Russian history or language was being taught, if at all.

That explained in part why in New Haven the go-to guy to give an informed perspective on the fast-moving developments of the revolution — how the provisional government headed by Karensky fell, and then how the civil war between Bolsheviks and Menshiviks ensued and who was to blame — turned out to be Alexander Petrunkevitch, in letters.

Having come to America decades before, he was in 1917 a tenured zoology professor. In 1917, however, he was explaining Russian politics to the congregation at the Summerfield Church on the New Haven Green. On Nov. 5, 1917 according to one of the letters on display, he wrote a righteous letter to the New Haven Journal Courier that his remarks in the reportage had been taken out of context.

“It appears from the report that I said this country and our allies were in this war for the money. I said nothing of the kind!” Petrunkevitch wrote.

These kinds of treasures, great and small, that really transport you, were themselves transported back to their archives in the evening on Wednesday. They and much else are available to see, by appointment, through Yale’s library system.

Written by Allan Appel for the New Haven Independent.