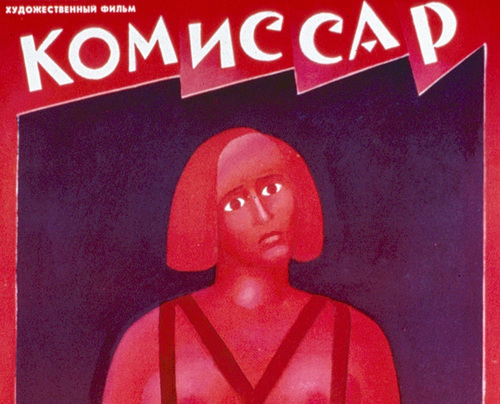 The Yale Macmillan Center, Carnegie Corporation and Films at the Whitney resumed their “Red Century: The Russian Revolution on Film” screenings this semester with a showing of Alexandr Askoldov’s 1967 Soviet film Commissar.

The “Red Century” screenings began last semester to commemorate the centennial of the Bolshevik Revolution. The series is back at the Whitney Humanities Center with a spring program featuring such rarities as Vladimir Fetin’s Tale of The Don and Gleb Panfilov’s No Path Through Fire.

“This year’s program features films that are quite difficult to see, especially with English subtitles — films that are hardly known in the West,” said co-organizer John MacKay, professor of Slavic Languages and Literatures and Film Studies.

An audience of 50 gathered on Wednesday night to watch the first film of 2018, Commisar. Chloe Papadopoulos GRD ’22, a Ph.D. candidate in Slavic Languages and Literatures, introduced the film and provided a general overview of its production history.

Commissar is based on a short story by Vasily Grossman titled “In the Town of Berdichev.” The film was Askoldov’s final project in a two-year course of study at the Higher Courses for Scriptwriters and Directors institute in Moscow. While the majority of his colleagues opted to produce shorts for their final projects, Papadopoulos explained, Askoldov decided to make a full-length feature about Jewish life on the frontlines of the Russian Civil War.

In the film, a pregnant Klavdia Vavilova, a Red Army commissar, must step down from her post as she waits to give birth. Vavilova’s comrade arranges for her to stay in the home of a large, multigenerational Jewish family. At first, the commissar is an unwelcome addition to the Magazanik household due to her status as a gentile and her revolutionary political ideology. However, the family softens when they learn this stone-faced heroine is pregnant.

As Papadopoulos remarked in her introduction, Commissar’s complexity lies in the abundance of binary oppositions in the film: male and female, individual and collective, revolutionary and non-revolutionary, violence and passivity.

Askoldov’s career began and ended with the release of Commissar. At its first screening in 1967, the film sparked vehement backlash from the Soviet censors. Censors challenged the film’s representation of Jewish life, and the Jewish people’s involvement in the civil war remains a topic of debate today. Additionally, censors attacked the film, claiming that the more experimental scenes were too difficult for audiences to comprehend.

“The censors said there were no edits that could save the film,” Papadopoulos said.

The film was immediately shelved and Askoldov was fired. Goskino studio prevented him from making films. In 1987, with the help of a cultural thaw in the Soviet Union, Askoldov and Ginzburg re-cut and re-released Commissar for the international festival circuit. The film received numerous prizes in 1988 and gained recognition in the West, where Askoldov’s film was received as a superb masterwork of Soviet cinema.

“It was the film of the unshelved films that were released in 1988,” MacKay said.

The next screening at the Whitney Humanities Center will take place on Feb. 7 and feature “Seventh Satelite,” a black-and-white Soviet drama from 1967.