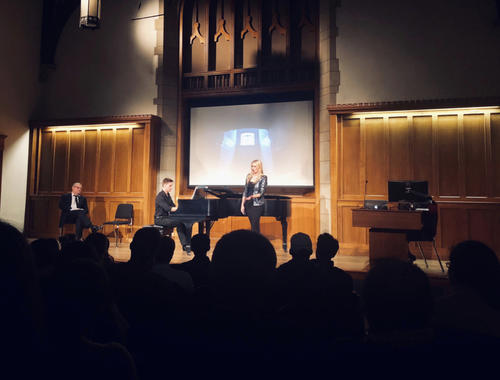 Nearly 60 years after the death of Russian pianist and composer Vladimir Drozdoff, three professional musicians from the Drozdoff Society gathered in Sudler Hall on Saturday to tell Drozdoff’s story through his music.

The event, titled “Reflections on the Music of the Russian Exodus: Vladimir Drozdoff” was a multimedia presentation consisting of narration, piano, singing and documentary video clips. The Drozdoff Society’s co-founder George Borisov wrote and directed the production, also performing as a narrator and pianist. Professor of Russian Slavic Languages and Literatures Julia Titus invited the performers to Yale’s campus after attending the same program last year at the University of New Haven. The event, which was free and open to the public, drew an audience of about 100 students, faculty and New Haven residents.

“It’s about our lost culture because the Russian Revolution was not just a change of political system,” Borisov said, “The cultural and intellectual soul was cut from the nation’s body.”

The production was a result of a coincidental meeting between Borisov and Natasha Cherny, Drozdoff’s granddaughter and the event’s producer. Soon after Borisov listened to an interview with Cherny about her grandfather, the two connected and formed the Drozdoff Society.

20 years prior to Borisov’s meeting with Cherny, Borisov fled to the United States from Russia after the collapse of the Soviet Union — an experience that parallels Drozdoff’s journey, Borisov noted. In Russia, he hosted a local television program titled “The Lost Pages of Our Culture,” which focused on the collapse of traditional Russian art during the Revolution. This show later inspired Borisov to trace Drozdoff’s story through research and performance.

Meanwhile, Cherny visited Russia and learned that Drozdoff’s legacy was still thriving at the Saint Petersburg Conservatory and beyond. When she returned home to the United States, eager to tell Drozdoff’s story, Borisov was the perfect partner.

“I had wondered for 20 years what to do with this legacy I had inherited,” Cherny said.

Borisov began writing the script two years ago and the production was debuted in January 2017 at Hunter College. Since then, the group has performed the presentation six times. The production features Ukrainian-American soprano Hanna Golodinskii and up-and-coming Russian pianist Vyacheslav Gryaznov.

While the show focuses on a single artist, Titus noted that Drozdoff’s journey reflects a broader aspect of Russian history and demonstrates how the Revolution “changed the fates of so many artists.”

“The idea is to show –– through the fate of one man, one artist, Drozdoff –– the impact of the Revolution,” Titus said.

Cherny emphasized that Drozdoff’s story mirrors that of many Russian artists and intellectuals to this day.

“Reflections on the Music of the Russian Exodus: Vladimir Drozdoff” was the first concert in a two-part series. For the second event, Gryaznov will perform an all-Rachmaninoff program of piano repertoire on Nov. 10 at 3 p.m. in Sudler Hall.

The Yale Macmillan Center hosted both events, which were sponsored by the Edward J. and Dorothy Clarke Kempf Memorial Fund and the European Studies Council.