Yale film scholar on Dziga Vertov, the enigma with a movie camera 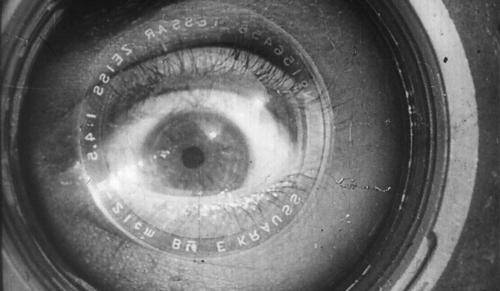 You may not know early Soviet filmmaker Dziga Vertov by name, but perhaps you’ve heard of his most famous film, “Man with a Movie Camera.” Released in 1929, this non-narrative silent film illustrates a day in the life of real Soviet city-dwellers without the use of characters or a plot. The experimental film is often found on “all-time best of cinema” lists and is a staple of introductory film studies courses today.

It was actually in a Yale introductory film course that Yale professor John MacKay, who is writing a biography about Vertov, first saw “Man with a Movie Camera.” While at Yale as a Ph.D. candidate in comparative literature, he served as a teaching assistant for “Introduction to Film Studies,” then taught by Charles Musser ’75 B.A., professor of American studies, of film and media studies, and of theater studies.

“It impressed me immensely, but I wasn’t quite sure what to do with Vertov,” said MacKay ’98 Ph.D., professor of film and media studies and professor and chair of Slavic languages & literatures.

In the early 2000s, when MacKay was hired in the Department of Slavic Languages & Literatures at Yale, he began teaching a course on Soviet film in which Vertov figured prominently. “My first book was on poetry,” MacKay explained, “but I had a longstanding interest in the Left, communism, and Marxism, as well as documentary and avant-garde film. And Vertov has always been a point of confluence of those things.”

“I started to notice that there was extraordinarily little written about him actually. There’s this well-known volume called ‘Kino-Eye,’ which is a translation of his writings published in a 1966 Soviet edition, but there was basically nothing written about him that used any archival materials,” said MacKay.

But MacKay knew that there was a substantial Vertov archive in Moscow. “I thought, ‘Okay, well I’m going to at least start doing something with it,’” he said, “And it turned out to be really, really fascinating. It turned out we knew an awful lot less than we thought we did about Dziga Vertov.”

This initial research in Moscow led MacKay to undertake the project that would become a three-volume, comprehensive biography of the filmmaker, “Dziga Vertov: Life and Work,” the first volume of which was published in November 2018 and focuses on Vertov’s youth and education. The second volume will be released in 2020 and deals with Vertov’s early career, beginning with his directorial debut, a 23-film series called “Kino-Pravda” (“Film-Truth”).

Serendipity played a role in both Vertov’s life and MacKay’s biography about it. In 1896, Vertov was born David Kaufman in the predominantly Jewish city of Bialystok, Poland; as a young man, he renamed himself Dziga Vertov, which roughly translates to “spinning top.”  As luck would have it, MacKay said, Vertov’s childhood best friend, Mikhail Koltsov went on to become the most prominent Soviet journalist of his day, serving on the editorial board of Pravda, the official newspaper of the Communist Party of the Soviet Union. Through his connections, Koltsov got Vertov his first real job in the USSR’s fledgling film industry as an editor assembling newsreel footage.

Vertov’s two younger brothers, Mikhail and Boris, were also drawn to the film industry. Mikhail served as the cinematographer for many of Vertov’s films, including “Man with a Movie Camera,” while Boris, who left Bialystok to study in Paris, became an Academy Award-winning cinematographer of famous French and American films, including Elia Kazan’s “On the Waterfront” and Sidney Lumet’s “12 Angry Men.” 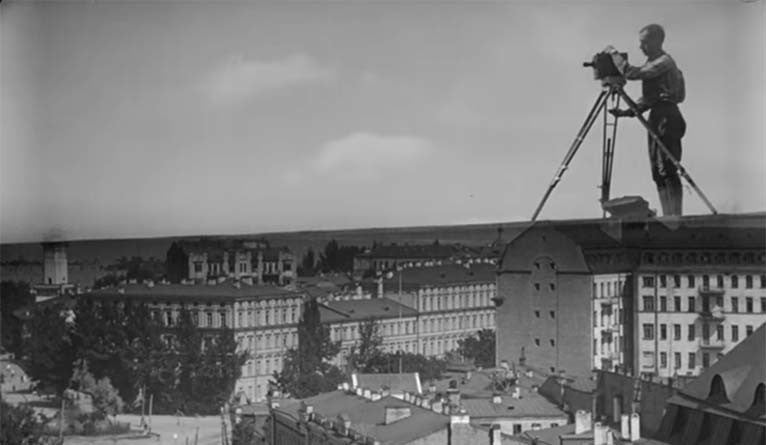 Vertov’s brother, Mikhail, as the titular “man” in “Man with a Movie Camera.”

Luckily for MacKay and his biography project, Boris Kaufman’s archive is housed in Yale’s Beinecke Rare Book & Manuscript Library, and his son lives in Ridgefield, Conn. MacKay said that talking to Vertov’s nephew and looking through his brother’s archive was “immensely helpful” in putting together volumes 1 and 2 of the biography.

“When I went to Moscow, I was also able to interview a couple people who either knew Vertov or knew his widow, who also worked with him extensively, so that was also really good,” MacKay noted.

Lens as eye, cinema as language

Vertov was “militantly against fiction film,” said MacKay in an earlier interview for Yale’s “MacMillan Report” interview program. “He believed that in the new society the USSR was attempting to create, fiction film would just be reproducing stereotypes, character types, clichéd plots, all the bad scripts. His idea was that the camera doesn’t need any of this to explore the world, that he could create different arrangements of image and sound that could be completely interesting on their own.”

“Vertov wanted the material that he used in his films to be something that was found and not staged,” he added. “Three Songs of Lenin,” Vertov’s 1934 documentary tribute to the late Soviet leader and probably the filmmaker’s least avant-garde, most observational documentary-style film, included interviews with Soviet workers. But he wanted those interviews — those “narrative shapes” — to be something that emanated from the subjects themselves rather than being strung together to support a prefabricated narrative, said MacKay.

During the opening credits of “Man with a Movie Camera,” there are title cards announcing that the film the audience is about to watch is “an experimentation in the cinematic communication of visual phenomena without the use of intertitles [the text cards that usually display dialogue in silent film], without the help of a scenario, and without the help of theatre,” whose sole purpose is “the creation of an authentically international absolute language of cinema on the basis of its complete separation from the language of theatre and literature.”

And Vertov was right, said MacKay. Without plot or characters or intertitles, he was still able to produce meaning. “It’s a film that shows how film can think about its own fundamental structures of address,” he noted, adding that “Man with a Movie Camera” is a film about filmmaking and the way the camera allows us to see.

In the MacMillan Report interview, MacKay elaborated: “What he does, continually, is show an image, then show what the cameraman did to get the image, then what the editor did or is doing to put the image together.” For example, there’s a shot of a family riding through the city center in an open-top car, which then cuts to a shot of a cameraman standing with his tripod in the car alongside the family, filming. Or there are shots of young children watching a street performance, intercut with shots of the editor, Elizaveta Svilova, Vertov’s key collaborator and spouse, assembling those same shots in a dark room.

In “Man with a Movie Camera,” Vertov also makes liberal use of double-exposure (when film is exposed twice to create a frame where one image is layered on top of another) to produce impossible and evocative shots. For example, the man with the movie camera — played by Vertov’s brother, Mikhail — looms giant-sized over the crowd he’s shooting or rises suddenly, tripod and all, from the bottom of a mug of beer. Vertov even used this trick for the final shot of the film, which is a tight frame of a human eye, superimposed on the lens of a movie camera. 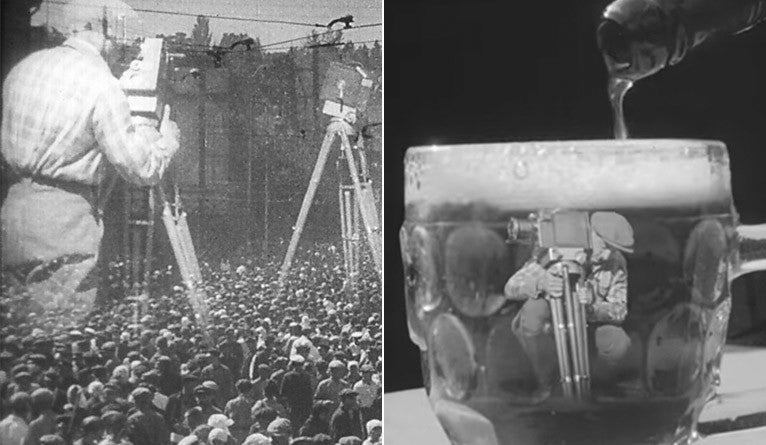 Two examples of double-exposure in “Man with a Movie Camera.”

“‘Man with a Movie Camera’ also has a kind of meta-narrative about human vision,” said MacKay. “It shows how film can really present a new kind of vision that isn’t designed for an individual viewer. I say this in my second volume of the biography: Vertov de-privatizes the channels of perception. Cinema for him was a means of appropriating and redistributing perception.”

After “Three Songs about Lenin,” the filmmaker was effectively dormant for the last two decades of his life. During the same period Vertov’s existing films were only revived tentatively in the USSR in the late 1950s, and gradually came to the attention of documentary and experimental filmmakers over the course of the 1960s.

MacKay attributes this period of dormancy to Vertov’s artistic style and his friendship with Koltsov, who, despite his support of the regime, was arrested during the Stalinist Terror and executed in 1940. Vertov’s interest in the avant-garde also put him out of step with the trends of the Soviet art world, which by the middle of the 1930s was committed to socialist realism alone. While Vertov’s films were full of obvious communist agitation and propaganda, he refused to construct the idealized, coherent, character-driven narratives that characterized socialist realism, explained MacKay. 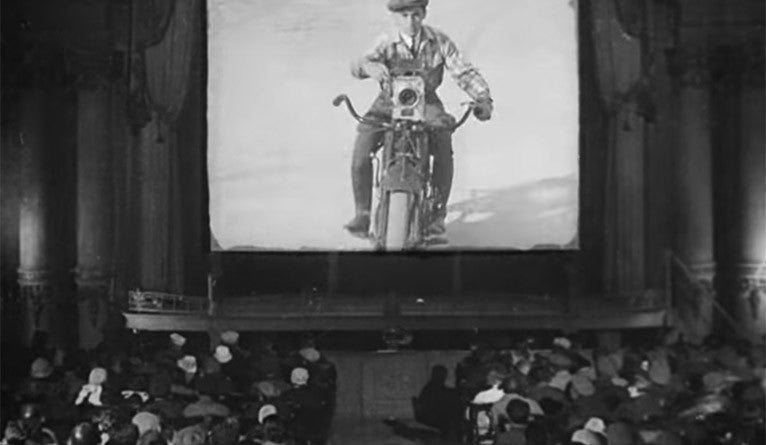 This fall, MacKay will travel to Vienna as part of his continued research for the final volume of the biography, which will discuss Vertov’s influence and impact on film history. “Austrian artists are some of the main ones who’ve actually taken up Vertov,” he said. “There’s a long history of Austrian response to Vertov, so I’m going to interview some of these people and see what they have to say about him.”