“Russian Politics Beyond the Kremlin” challenges the recent tendency in the West–visible in both scholarly and popular discourse–to narrow the scope of Russian politics to the Kremlin (and even, in many cases, to the person of the President). Over the course of two days, contributions from scholars based in Russia, Europe, and the United States will explore various dimensions of a much more complex and multidimensional political field in Russia. Topics to be covered include: aesthetics and cultural politics; gender; historical memory; media; protests and social movements; regional and local politics; and ethnicity and nationalism. Although participants hail from a variety of disciplinary backgrounds–from anthropology to sociology to political science and beyond–they share a commitment to ground-level research methods and to innovative social, cultural, and/or political analysis. 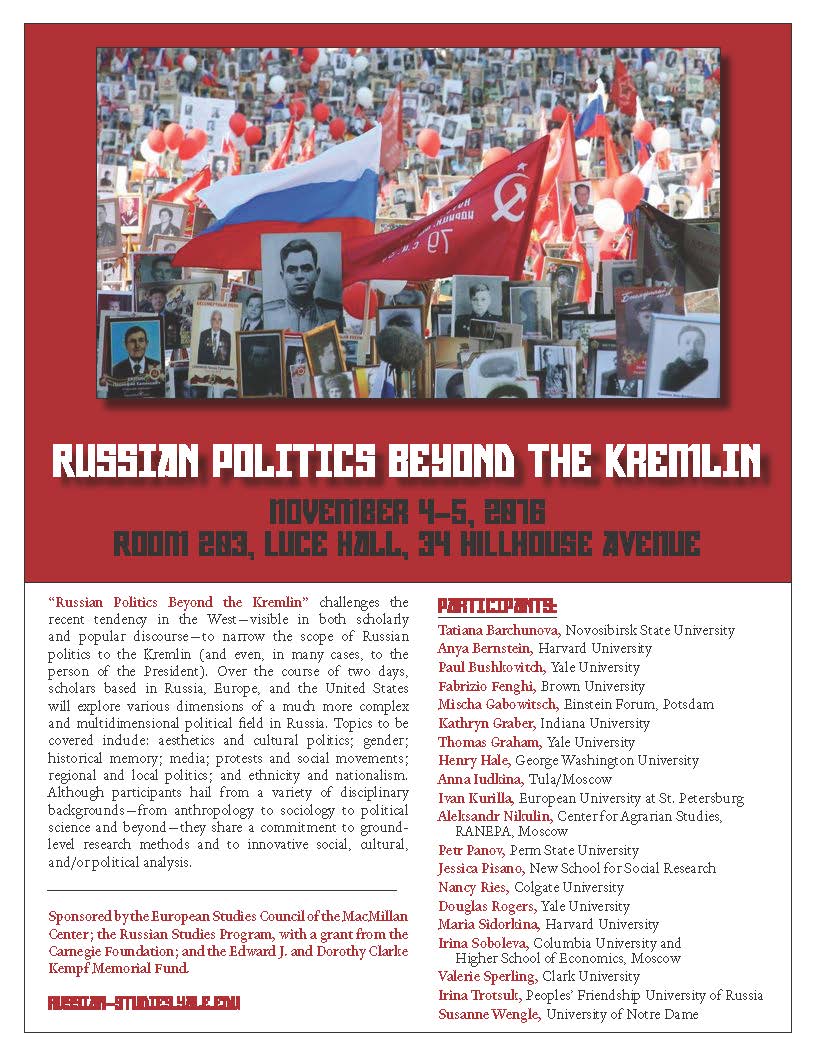 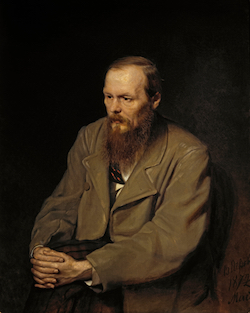 Since 1991, the classical Russian literature of the nineteenth century has gone through both eclipse and revival. Modernist and post-modernist accounts of Russian culture that came to the fore in the late 1980s have begun to give way to a reinterpretation of the nineteenth century, one that adds to the Russian classics a wider perspective encompassing music, visual arts, and theater and new methodologies. This process is only beginning and requires a united effort of scholars to succeed.

Inspired by this renewed interest in the nineteenth century and the general shift toward destabilizing disciplinary and historiographic borders, this conference, under the guidance of Molly Brunson, Associate Professor of Slavic Languages and Literatures, will bring together prominent senior scholars and emerging junior scholars from Russia, Europe, and the U.S., and from a wide range of fields (language and literature, musicology, art and architecture history, performance studies and drama history). Roughly fifteen to twenty speakers will be invited, with the intention of maximizing dialogue between Russian specialists and their American and European counterparts, and creating potential for conversation and collaboration among an international collective of historians of the arts in its broadest sense. The conference will take place over two days in early Fall 2016, with a keynote speaker and five panels (of three speakers each). Depending on the final list of participants, the conference will either be bilingual (possibly with a translator) or in English only.

The Department of Slavic Languages and Literatures at Yale University invites you to Cold War Narratives Reimagined, an interdisciplinary graduate conference on April 8-9, 2016.

More than twenty-five years after the end of the Cold War, scholars are able to refocus, recast, and reevaluate the discussions centered on this period of global tension, military non-conflict and cultural polarization. Whether within the United States or in the international arena, it is typified by physical and imagined borders, walls, spheres of influence, and missile gaps. This conference will seek to engage with these physical and symbolic spaces, to challenge the East-West dichotomy in Cold War narratives, and to examine what happens after these zones and margins dissolve. “Cold War Narratives Reimagined” is an interdisciplinary conference that centers on the intellectual, cultural, and environmental legacies of the Cold War era in the United States and in the former Soviet Union, both those of its immediate aftermath and of contemporary reframings of these legacies.

Tony Lin (Connecticut College): “An American Sputnik? The International Tchaikovsky Competition in the Context of the Cold War”

Pawel Koscielny (Berkeley): “Losing The War in The Ether; Radio Free Europe’s Failure in The Cultural Cold War with Poland”

3:00 – 4:00   Object Session with the materials from the Beinecke Rare Book & Manuscript Library

Lilya Kaganovsky, Associate Professor, Department of Slavic Languages and Literatures, Director of the Program in Comparative & World Literature, University of Illinois at Urbana-Champaign

Masha Panteleyeva (Princeton): “The Form of Socialism: NER and the Architectural “Syntax” During the Thaw”

Jennie Scholick (UCLA): “’A Different Faun and a Different Nymph’”: The Lavender Scare and Jerome Robbins’s Afternoon of a Faun”

Robynne Mellor (Georgetown): “The Cold War’s Underground Front: Environmental and Health Effects of Uranium Mining in the United States and the Soviet Union, 1955-1975”

Amanda Lerner (Yale): “Vying for Space in Space: Ownership of the Universe in Soviet and American Science Fiction “

April 8-9 2016 - Red on Red: A Symposium on Post-Socialist Art and Critical Theory

Hosted by the department of Comparative Literature and Yale University

2:30-3:30 — Keynote 2: Michaela Bronstein (MIT), “The Author and the Assassin: The Novel as Act of Terror in Coetzee and Brink,” with a response from Ruth Yeazell (Yale University)

5:00-6:00 — Keynote 3: Magali Armillas-Tiseyra (Penn State University), “From Below: Insurgent Globalism(s) at the Start of the Twenty-First Century,” with a response by Ayesha Ramachandran

Dorine Schellens (Albert-Ludwigs-Universität Freiburg), “‘Painting the Town Red’: St. Petersburg as a Dynamic Palimpsest in the Work of The Laboratory for Poetic Action”

3:00-4:00 — Keynote 5: Snehal Shingavi (UT Austin), “The Communist Debates in India: the Congress Socialists, the Communists, and the Hindustan Republican Army” with a response from Inderpal Grewal (Yale University)

Nikola Dedić (University of Belgrade) and Karla Lebhaft (University of Zadar), “Red on Pink:  Recognizing the ‘Critical Moment of Aesthetic Experience’” in Post-Yugoslavia” 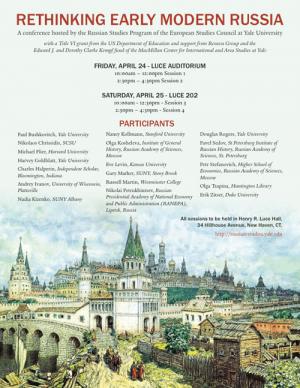 A conference planned for April 24-25, 2015 is being organized by Paul Bushkovitch, Reuben Post Halleck Prof of History. The conference is intended as the first stage of a larger project on the same theme, the purpose being to set the agenda and bring it to the attention of colleagues. The early modern era (1500-1800) was the time when Russia changed from a marginal state on the northeast fringe of Europe to a major power, and understanding that era will have a major impact on the conception of Russian history through the present day. Obviously reconceptualizing the history of those centuries will also have a considerable impact on teaching.

The study of Russian history has changed a lot since the 1980’s, to some extent by the appearance of new ideas and paradigms, but also by an enormous if uneven empirical revolution.

The period most affected by the empirical revolution is the early modern era and it has not been accompanied by much rethinking.  The period continues to be seen as a period of stagnation interrupted by the reforms of Peter the Great.  That is a scheme inherited from the nineteenth century, and it is time to reconsider the speed and character of change in those centuries.  To give only one example, the population (within constant boundaries) increased by some five to six times over three hundred years, a rate of increase unparalleled in Europe and most of Asia. These were centuries of massive cultural change as well. The conference will bring together a group of historians, social scientists, art historians, and others to think about a strategy for researching and rethinking these centuries.

All sessions will be held in Henry R. Luce Hall, 34 Hillhouse Avenue.

The conference is sponsored by Renova Group, the Edward J. and Dorothy Clarke Kempf Fund, and the European Studies Council, with a Title VI NRC grant from the US Department of Education.