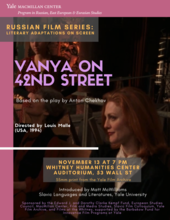 “The agitated emotions of Chekhov’s personages become veritable landscapes in the hands of Gregory’s assembly—entities as “readable” as they are squirmily unwatchable. Larry Pine as Astrov, for example, is noxiously vacant, shriveling under a lifetime of guilt behind the scalpel and seeking to save man instead by detachedly planting trees; he encompasses both a farce and a tragedy on his own. (Chekhov was, himself, of course, a frustrated man of medicine.) Furthermore, since the performance takes place in the dilapidated, pre-Disney renovated Amsterdam Theater, once the pride of Broadway, there’s a sense in which the actors become solemn, thankless “stewards” of a now-barren dramatic tradition, just as Vanya works the soil of his brother-in-law’s estate in vain. Insofar as the film Vanya on 42nd Street documents this effort, it’s a kind of shrugging elegy for an urban-cultural era that, by the ‘90s, was long gone. Often overlooked, however, is the fact that Louis Malle didn’t simply document what the actors were accomplishing week after week on the crumbling stage of the Amsterdam, but rather imposed upon their intuitive performances highly sympathetic filmic devices. The result is as slight and as radical a change as the one from The Wood Demon to Uncle Vanya; it’s the translation from experimental theater to experimental cinema.” - for the full review: https://www.slantmagazine.com/dvd/vanya-on-42nd-street/
1994 | 1 hr 44 mins
Directed by Louis Malle
free and open to the public
35mm print from the Yale Film Archive
Sponsors:
Edward J. and Dorothy Clarke Kempf Memorial Fund, Russian, East European and Eurasian Studies Program, European Studies Council at the MacMillan Center, Film and Media Studies Program, Slavic Film Colloquium, the Yale Film Archive, and Films at the Whitney, supported by the Barbakow Fund for Innovative Film Programs at Yale