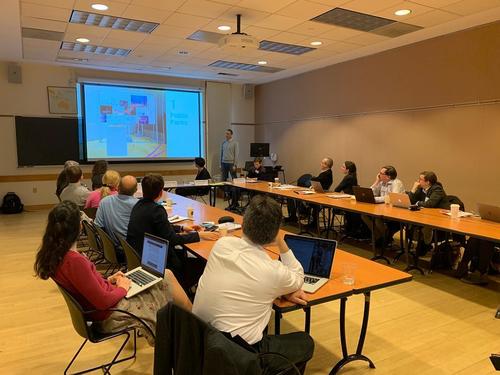 The two-day conference consisted of six panel discussions which explored topics ranging from the role of female entrepreneurs in Russian joint-stock companies to the political functions of Russian agrifood corporations.

The first session on Friday featured Nikolaos Chrissidis from Southern Connecticut State University, Erika Monahan from Dartmouth College, Ilya Vinkovetsky from Simon Fraser University and Paul Bushkovitch from Yale. Professor Monahan opened the session with a presentation titled “Board Rooms and Big Steppes: Nicolaas Witsen and the VOC in Eurasia,” which unpacked the intersecting stories of Nicolaas Witsen and Andrei Vinius, two Dutchmen with near identical lifespans who found success as merchants involved in trade with Russia. For his part, Professor Vinkovetsky explored the founding and function of The Russian-American Company (RAC), the monopolistic fur-trade company that from 1799 until 1876 operated Russia’s American colonies (such as Alaska) on behalf of the Russian Empire. His presentation was titled “From Furs to Tea: The Russian-American Company as a Business.”

The second session of the day featured Steven Nafziger from Williams College, Tatiana Iakovleva from the Peterhof State Museum-Reserve, Sergei Antonov from Yale, Sofya Salomatina from Moscow State University, and Thomas Owen from Harvard University. Dr. Iakovleva’s presentation, which was titled “Traders and Law in the Russian Empire After the Great Reforms,” explored the attitude of traders to law in the Yenisei province of the Russian Empire.

“Beginning my research [into] the implementation of laws in the trade, I paid much attention to the huge number of violations of the law,” Dr. Iakovleva said. “It seemed to me that all traders were perpetrators, but then an analysis of the sources showed that… not all traders were willing to be perpetrators, so they were looking for ways to circumvent the law or conceal the violation.”

Ms. Iakovleva’s presentation was followed by that of Professor Antonov, titled “Rebuilding Russian Capitalism: Rogue Entrepreneurs on Trial in the 1870s.” During his presentation, Professor Antonov discussed two key Russian white-collar scandals of the 1870s involving entrepreneurial noblewomen linked to top government circles and to the imperial court. Professor Salomatina concluded the session with a presentation titled “Joint-Stock Commercial Banks in the Russian Empire: Deconstruction of the Russian Banking History Discourses.”

The final session on Friday featured Professor Antonov, Emily Erikson from Yale, Galina Ulianova from the Russian Academy of Sciences, Amanda Gregg from Middlebury College and Ella Saginadze from Saint Petersburg State University. Dr. Ulianova’s presentation focused on a group of female factory-owners who were board directors and shareholders of the biggest Russian joint-stock companies in last third of the 19th century; Professor Gregg discussed “The Births, Lives, and Deaths of Corporations in Late Imperial Russia”; and Dr. Saginadze presented on “The Economic Policy of the Russian Empire’s Government and the ‘Purely American Development’ of Agriculture in the Caucasus” from 1894 to 1917.

The second day of the conference also consisted of three panel discussion sessions, with the first featuring Victoria Smolkin from Wesleyan University, Adam Leeds from Columbia University, Steven Harris from the University of Mary Washington and David Engermann from Yale. In his presentation, titled “The First and Lowest Stages of Socialism: The Corporation in the Marxism of the Second International,” Professor Leeds discussed the Bolshevik conception of Socialism in 1917. For his part, Professor Harris examined the trajectory of the relationship between Aeroflot — the flag carrier and largest airline of the Russian Federation — and Pan American World Airways during the Soviet period.

The penultimate session of the conference featured Thomas Graham from Yale, Peter Rutland from Wesleyan University, Susanne Wengle from the University of Notre Dame, Nina Poussenkova from the Russian Academy of Sciences and Douglas Rogers from Yale. Professor Rutland spoke about the dynamics of state-business relations in Russia in a presentation titled “The Russian Corporation Today: Between Neoliberalism and the Security State.” His presentation was followed by that of Professor Wengle, titled “Russian Agrifood Corporations as a Force of Change.” Dr. Poussenkova concluded the session with a presentation titled “Rosneft, a Triple-A Company: Ambitions, Acquisitions, Alliances.”

The final session of the conference featured Andrei Semenov from Yale, Dominic Martin from Yale, Benjamin Krupp from the University of Illinois, Urbana-Champaign and Justine Buck-Quijada from Wesleyan University. In a presentation titled “Corporation, Education, and Knowing Your Station: Social Estates Between a Closed City and an Oxbridge College,” Dr. Martin discussed the educational experiences of the highly privileged children of the new Russian mercantile elite in England.

“I was teaching these elite school children at a fee-paying school, where the fees are very high…and the education system there is quite interesting,” Dr. Martin said. “It’s like a liberal arts university-college with kids who learn Latin and Greek. It wasn’t just about passing exams and tests, [whereas] English schoolchildren are often subject to a barrage of tests.”

Each session was followed by a question and answer session with members of the audience. After the final session of the conference, attendees were invited to participate in a general discussion with the speakers.