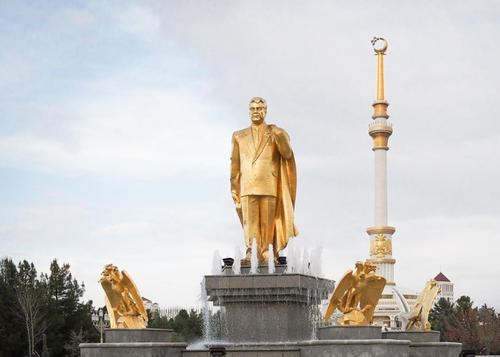 Anastassia Obydenkova, a leading research fellow at National Research University Higher School of Economics (Moscow) and a research affiliate at the Institute for Economic Analysis of the Spanish Council for Scientific Research (Barcelona), spoke about regional non-democratic international organizations at a talk on Monday, November 12.

The talk, titled “Authoritarian Regionalism: The Case of Post-Soviet Eurasia,” was co-sponsored by the Yale programs in European Union Studies and Russian, East European & Eurasian Studies. Professor David Cameron, Director of the Yale Program in European Union Studies, introduced Dr. Obydenkova, noting that she was awarded the Fox Fellowship at Yale University almost 20 years ago.

Dr. Obydenkova has also served as a Fung Global Fellow at Princeton University and a Kathryn and Shelby Cullom Davis Senior Research Scholar at Harvard University. She is currently working on a book with co-author Alexander Libman, titled “Authoritarian Regionalism in the World of International Organizations: Global Perspective and Eurasian Enigma,” from which she drew material for the talk on Monday. During her presentation, Dr. Obydenkova discussed three main regional non-democratic international organizations — which she called “autocratic regional clubs” — the Commonwealth of Independent States (CIS), the Eurasian Economic Union (EEU), and the Shanghai Cooperation Organization (SCO). She explained that these organizations are “critically different” from “democratic regional clubs” like the European Union, in part because their membership is more heterogeneous along religious, cultural and political lines.

“If you think of the European Union, we can see how homogenous member states are,” Dr. Obydenkova said. “They all have to be democracies, they have to have market economies, and so on and so forth. But when it comes to autocratic regional clubs, they are very heterogeneous… the [member states] are very different in terms of political regimes. Some of them are hybrid, some of them are consolidated autocracies, and so on.”

Additionally, Dr. Obydenkova argued that while democratic regional clubs are considered by many to have a democratizing impact on member states and neighboring countries, autocratic regional clubs tend to sustain autocratic government among their members. In particular, Dr. Obydenkova outlined some preliminary results from her research which suggest that the tenure of a ruling autocrat in a member-state of a non-democratic regional organization, like the SCO, tends to be longer than that of an autocrat leading a non-member state. A number of factors may be responsible for this, the scholar added, such as the provision of loans and economic subsidies by the SCO that prevent social unrest and uprisings, as well as the prevalence of rhetoric which prioritizes stability and increases the legitimacy of anti-democratic governments.

After concluding her presentation, Dr. Obydenkova fielded questions from audience members. Her book on authoritarian regionalism is expected to hit shelves in April 2019.