Event Recap: Politics vs Policies? What it Means to be a Politician Today 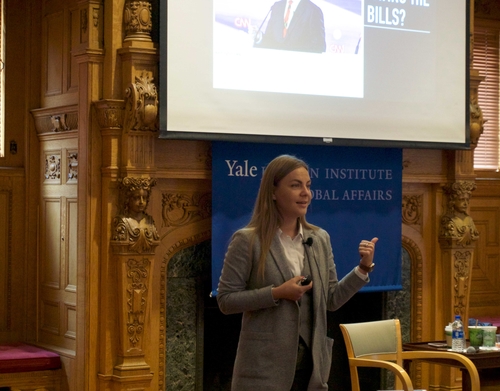 “Who is paying the bills?” asks 2019 World Fellow Olena Sotnyk, a lawyer and a former member of parliament of Ukraine. She talked to an almost full audience in Horchow Hall on October 29, 2019. Although having served for 5 years between 2014-2019 as a Member of the Ukrainian Parliament, Ms. Sotnyk spoke about the problems of current politics around the globe, including the United States, rather than Ukraine.

The bills referred not only to public spending, but also to the funds spent by politicians during their campaigns. “Whose interests do politicians represent? Themselves, yours or donors?” The dilemma of whose interest to represent, according to Olena Sotnyk, is the reason why contemporary politics fails to deliver “guaranteed and quality state services” which “we [citizens] pay taxes for [it].” She pointed out that “even a good politician is in a trap of his ideal view about politics.”

For instance, Ms. Sotnyk says that the problem of politics is “the lack of politicians dialogue with and interest of the people.” Ms. Sotnyk suggests that “politicians should represent your interests and make the best decisions in the circumstances.”

The problem occurs because the politicians are unaware of whose interests to represent-campaign donors, citizens, or their own. Being re-elected is a central aspect of most politician’s own interest. In other words, some politicians “only care about getting more votes,” and this leads to populist policies which are not always the most effective.

The solution Ms. Sotnyk offers is not a radical change to the system. She suggests that it is essential to “make politicians listen to citizens.” To ensure this, “citizens should be active and ask politicians to change things.”

In an attempt to explain the political dilemma of making the right choices vs. decisions that risk re-election, Ms. Sotnyk says that the politicians should communicate, “if you don’t explain yourself, then of course you are going to be protested and not supported.” However, “if you are honest, then they [the people] will support you.”

Her speech was followed by a q&a session where the audience asked questions on Ukrainian and world politics. One remarkable question was about Ukraine’s new governing party, which is the first to secure a one-party majority for the first time in Ukrainian political history. Ms. Sotnyk said such governments create opportunities to reform quickly. Olena Sotnyk also stressed on the importance of proper “checks and balances, and an independent judiciary system” in a state.