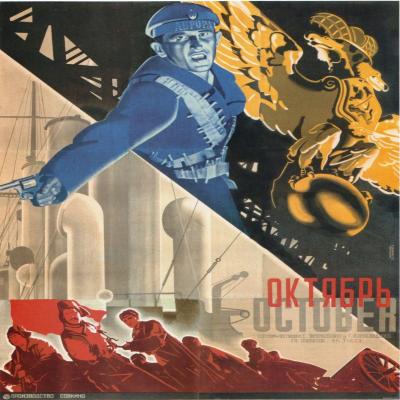 The now 100-year-old October Revolution was the central political event of the 20th century. It created the vortex around which everything post-1917 - the rise of fascism; the various Popular Fronts; the Second World War; the Cold War; the Third World moment and decolonization; revolutions in China, Vietnam, Cuba and elsewhere; Communism’s own fratricidal conflicts and ultimate global decline - swirled, at greater or lesser distance. The centennial offers us the chance to reflect on the long history of cinematic representations of the Revolution and its aftermath, representations which in many cases also stand as major, internationally acknowledged monuments of film art by such masters as Sergei Eisenstein, Vsevolod Pudovkin, Esfir Shub, Miklós Jancsó and Aleksei German.

In our first semester, we will look at the first decade of revolutionary film, from the early years of Soviet silent film through the beginnings of the sound era. All films will be shown on celluloid, DCP or blu-ray, and all silent films will be accompanied by live music, making this a rare chance to see some of the most important films ever made in superb viewing conditions.

All screenings at the WHITNEY HUMANITIES CENTER AUDITORIUM

53 Wall St, New Haven Free and open to the public

One of the truly legendary feature debuts in the history of cinema - Eisenstein was only 26 when he directed it - and the spark that exploded into the great tradition of militant labor films, STRIKE at once takes us back to the colossal workers’ revolts in Russia at the turn of the century, and looks forward to the dazzling and still-startling achievements of the Soviet cinematic avant-garde.

WITH LIVE MUSIC BY THE ALLOY ORCHESTRA!

The most famous and the most controversial of all film commemorations of the 1917 revolution, OCTOBER was both the first film to land Eisenstein in trouble with the Soviet authorities, and arguably the work in which his provocative ideas about “intellectual montage” were most fully realized. A work of unique historical importance, OCTOBER is one of the most formally elaborate, conceptually rich, and emotionally charged films of the entire silent era.

A unique blend of revolutionary epic, satirical comedy and ethnography, Pudovkin’s extraordinary film tells the story of a Mongol trapper (played by Valery Inkizhinov in one of the most unforgettable performances of the silent era) who moves from persecuted colonial subject to puppet monarch of Mongolia to revolutionary leader.

The first independent work of Esfir Shub, Soviet female director and a pioneer of compilation film, Fall of the Romanov Dynasty shows tsarist Russia in the years prior to the Bolshevik revolution. Made entirely of old newsreel footage, the film employs montage to expose the decay of the old regime and escalating class struggle.

A young military officer returns to St. Petersburg in the wake of the Civil War, only to find his native city completely trans formed by the newly emergent proletarian class.  One of Fridrikh Ermler’s best known works, this silent film is a paragon of cinematic psychologism and Soviet montage.​

Described by Vladimir Putin as his “favorite film”, Chapaev tells the story of an average peasant during the Russian Civil War with an organic talent for leadership. In coupling the heroic register of socialist realism with down to earth humor, the film gives a romantic account of the tragic struggle that helped to define Soviet identity.