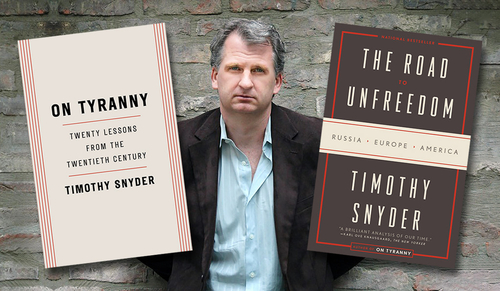 As a general rule, Yale puts little stock in external rankings. But every now and again, when there’s especially good news, it’s hard not to boast just a little.

And so we report that Timothy Snyder, the Richard C. Levin Professor of History, has not one but two books on the weekly New York Times bestseller list — one of them ranked at the top in the paperback nonfiction category. The list is dated Oct. 27.

Snyder’s 2017 book “On Tyranny: 20 Lessons from the 20th Century” holds the number-one spot for paperback nonfiction, while his 2018 “The Road to Unfreedom: Russia, Europe, and America” is ranked 10th on the list of the 15 bestsellers in that category. Both volumes, published by Tim Duggan Books, examine the rise of authoritarianism. In each, Snyder claims with urgency that American democracy is under threat.

Snyder described his books receiving such a coveted distinction as “good news inside of bad news.”

“The Road to Unfreedom,” Snyder said, is a “much more demanding book to read,” adding, “It’s a more scholarly book with lots of footnotes to sources in various languages, trying to explain the overall shape of the new authoritarianism in Russia, then in Europe, then in the United States. The good news is that people are taking the trouble to read a book like that.”

The Yale historian has received messages from readers of “On Tyranny” from around the world. He finds it heartening, he says, that “books do seem to make a difference in people’s lives.”

The New York Times list is widely considered the preeminent list of bestselling books in the United States. It is uncommon for authors to have more than one book on the list; almost 20 years ago, for example, the newspaper added the new category of “children’s books” when two books in J.K. Rowling’s Harry Potter series dominated the bestseller list in fiction for weeks on end.

Snyder, who specializes in the history of Central and Eastern Europe, and in the Holocaust, credits his students with inspiring the ideas behind his bestselling books by inviting his thoughts about events in the world. He added that he would not have been able to write “On Tyranny” so quickly had he not had examples of political oppression so fresh in his mind as a result of his teaching and research.

Despite his New York Times bestselling-author status, the historian says he has never entertained the idea of giving up teaching to write full time.

“I love to teach, and see it as the main part of my job,” he said. “I don’t think there is a tension between being a scholar and being a public person. I think everyone should bring whatever talents or skills they have into public life.”