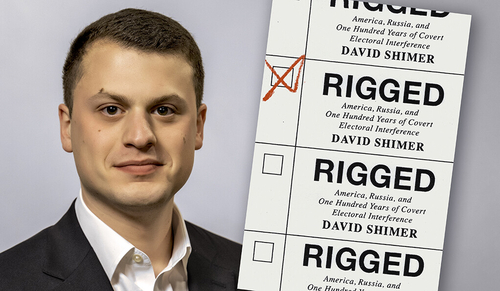 Russian hackers and internet trolls sought to manipulate American voters throughout the 2016 U.S. presidential campaign, as they are doing again in 2020. Their efforts represent the latest chapter in a 100-year history of secret operations by the Soviet Union’s KGB, Russia under Vladimir Putin, and the CIA to influence electoral outcomes in foreign countries.

“Rigged: America, Russia, and One Hundred Years of Covert Electoral Interference,” a new book by journalist and historian David Shimer ’18 B.A., M.A., exposes this shadowy history while offering a detailed account of Russia’s 2016 attempts to undermine U.S. democracy and the Obama administration’s efforts to stop it. The book, published this summer by Knopf, draws on archival research across continents and interviews with 130 officials, including a former KGB general and eight former CIA directors.

Shimer, a former editor-in-chief of the Yale Daily News, recently spoke with YaleNews about his book, which grew out of work he began as an undergraduate. Interview condensed and edited.

What led you to write the book?

I was alarmed in 2016 by how policymakers and commentators frequently described Russian interference in our election as unprecedented. When something is treated as unprecedented, it suggests there’s no history behind it, and it makes it very easy to create myths, misconceptions and, really, just lies about that thing because it exists in a vacuum.

From there, I map out how democracies should be responding to this threat, because I believe very strongly that the lessons of the past can and should be used to defend the democratic model today.

What were the origins of Soviet covert electoral interference?

In 1919, Vladimir Lenin, the first Soviet leader, founded an organization known as the Communist International, or Comintern, which was meant to unite the communist parties of the world and to foment revolution abroad. It distributed money and supported propaganda organs in various countries to help communist parties compete more effectively at the ballot box and ideally win elections. Lenin’s vision was that communist parties would assume power, topple their governments, and abolish their national borders.

None of that happened, but there was still immense paranoia in the United States and the United Kingdom toward the Comintern over fears that the Soviet Union was interfering in their elections and manipulating their democratic processes.

How did covert electoral interference evolve during the Cold War?

After World War II, the Soviet Union under Joseph Stalin aggressively interfered in elections across Eastern Europe in countries like East Germany, Hungary, and Poland with tactics that in many ways foreshadowed Putin’s. They manipulated voter rolls, falsified vote counts, and spread massive amounts of propaganda — things like posters, pamphlets, and leaflets — to manipulate people’s views.

These elections were effectively rigged, and communist parties across Eastern Europe then came to power and ceased holding competitive elections. The United States then had to decide whether to match Soviet electoral interference with more electoral interference, and that decision played out in Italy, where the communist party was surging ahead of the country’s 1948 election. It was in this context that President Harry Truman formally authorized the CIA to engage in covert action for the first time — so that the CIA could interfere in the Italian election. So, as it turns out, the starting point of CIA covert action was electoral interference. The CIA then launched a massive operation to manipulate Italy’s election not by altering actual ballots, but by giving millions of dollars to the Christian Democratic Party and by executing a scare campaign designed to frighten voters into turning out for the centrist parties. The CIA also orchestrated grassroots initiatives that appeared spontaneous. The Christian Democrats then won that election, and the perception inside the agency, though unproven and unprovable, was that America had made the decisive difference.

Many former CIA officers told me in interviews that they viewed the ‘48 operation in Italy as the agency at its best. And in the aftermath of that operation, as the CIA’s chief internal historian put it to me, the agency and the KGB went toe to toe in elections all over the world.

Did the Soviets meddle in U.S. elections?

Yes, and what those operations tell us is very important. There’s a misperception today that foreign electoral interference is somehow a political issue — that if you say election security matters, then you’re a partisan Democrat. History shows that that is just not so. During the Cold War, as I detail in my book, the Soviets sought to destroy the candidacies of Richard Nixon, a Republican, and of Ronald Reagan, a Republican. It just so happens that today Russia believes it is in its interest to support a Republican.

But Russia’s aim here is to advance Russia’s objectives, which are to choose our leaders, to sabotage and delegitimize our process of succession, and to undermine public confidence in the democratic model, and that should offend and alarm all Americans, regardless of party loyalties.

How did the situation change after the Cold War?

I researched both countries’ modern practices aggressively. I interviewed more than 130 officials, including a former KGB general, eight former CIA directors, many more CIA officers, and a former U.S. president. What I found was that in recent years, Russia has doubled-down on the practice of covert electoral interference. Its intelligence services are using the internet to influence and subvert elections all over the world in support of divisive and authoritarian-minded candidates.

America has taken the opposite approach. The CIA has moved away from the practice of covert electoral interference, at a time when the internet has exposed our own elections in unprecedented ways. During the Cold War, the KGB targeted many U.S. elections, but those operations were generally limited in their scope and significance. The Soviet Union lacked the capabilities to disrupt and direct U.S. elections in a meaningful way. That is no longer the case. Because of the internet, Russia can now manipulate American elections in a targeted and far-reaching manner.

Has the United States done enough to protect itself against Russian interference after 2016?

In short, no. America still has no comprehensive national strategy to deal with this threat. And in many ways, things have gotten worse. Whereas President Obama sought to defend against Russian interference, the current president has solicited foreign interference in our elections, which signals to countries like Russia that they can continue executing these types of operations without risking serious consequences. I don’t see any unity in America about countering this threat or even acknowledging that it exists.

I think that America is vulnerable not only for those reasons, but also because of the coronavirus, which is already sowing doubt about the stability of our voting process and whether the upcoming election will be fair. Remember: Putin’s objective is in part to show Americans and show the world that the democratic model doesn’t work. And in that sense, we’re as vulnerable as we’ve ever been, because there’s so much concern domestically, regardless of Russian interference, that our democracy isn’t working, so it wouldn’t take much for Russia to further degrade public confidence in this election, whether by manipulating our actual voting systems or by spreading disinformation about fraud.

How did your experience at Yale influence the book project?

This book wouldn’t exist without the Yale history department, and it definitely wouldn’t exist without Professor Timothy Snyder, who was my thesis advisor during my senior year, which was when this project really began. I spent the summer of 2017 reporting in Germany for The New York Times, and while I was there, I met a former East German intelligence officer named Horst Kopp, who told me about an electoral interference operation he helped execute in 1972 to preserve the government of West German Chancellor Willy Brandt. This operation was decisive in its impact and kept Brandt in power — and it fascinated me.

I spent a year intensely researching that operation under Professor Snyder for my senior thesis. After graduation, I went to Oxford to pursue my doctorate with the support of the Marshall Scholarship Program. While there, Professor Snyder continued advising my work as I looked beyond the 1972 operation and dug into the broader history of covert electoral interference. Then, when I found out I’d be able to write this book, he guided me through that process from start to finish.

You mentioned the history department. Did you receive help from other faculty?

John Gaddis, who has been a mentor to me since I was in the 10th grade, taught me throughout my time as an undergraduate and was immensely supportive of this project. He helped me with my proposal and reviewed my manuscript twice, but more than that, I never would have developed such an interest in the Cold War and really in history without him.

There were many other professors who took the time to review a chapter of my book or even the full thing. Their feedback was essential to my writing process. I only had about five months to write this book, and if not for faculty members like Professor Snyder and Professor Gaddis, I would have struggled even more than I did. I am very grateful to them.

Written by Mike Cummings for YaleNews.