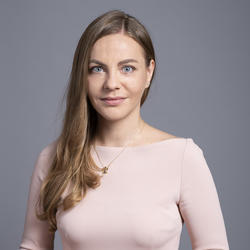 The following interview is part of a series of the European Studies Council’s Spotlight of Scholars in European, Russian or Eurasian Studies.

Olena Sotnyk is a Ukrainian politician, lawyer, and human rights defender. She served as the Member of the Parliament in Ukraine (2014-2019) where she was a well-known legislator and public policy maker in areas such as rule of law, judicial system reform, anticorruption, and youth policy.

She holds prominent positions in the working bodies of several international organizations, including the Council of Europe, and focuses on issues including Euro-integration of Ukraine and female empowerment. Prior to her political career, she was a lawyer and served on the board of The Ukrainian Bar Association and Aspen Ukraine Alumni. Currently, she is a World Fellow at Yale’s Jackson Institute for Global Affairs.

What brings you to Yale?

I was drawn to the World Fellows program because it offers a mixture of traditional education with a unique knowledge sharing platform of the fellows’ own experience. It was also the right time in my career to give myself an opportunity to think about future goals, while also learning new skills, and broadening my views on foreign policies, international security and other issues which are strongly represented in Yale University curriculum.

I also came here to share ideas and to discuss solutions to common global problems.  After my time here, I’ve come to realize that the issues pertaining to Ukraine are not just regional. Many of these problems are definitely part of the wider global agenda. What happens in Ukraine in 10 years will certainly define a lot of things. I worked as a politician in Ukraine’s parliament during the hardest time – just as the Russian War started – so I think it is a good idea to share this experience with other scholars and policy makers abroad.

What made you get involved with politics in the first place?

In a way I think it was by chance but first and foremost, it was also a huge risk. I had to switch from a very successful career as a lawyer even though I was young. During this time, Crimea was annexed (by Russia) and this raised many challenges for my country. So, I thought it was a chance for me to change these circumstances, which I didn’t agree with or like. And, it was a time for me to make a difference.

Is politics a good way to change things?

Yes, but I wouldn’t say it is the only way. I believe you can make a lot of effort in other areas to make the world a better place. People should be considerate of the environment, and practice sustainability, humanity, and kindness. If every person put five percent more effort into improving current issues, we would all be in a better place.

But politics is certainly one of the most efficient tools, because the impact of a given decision is so great. A political action can immediately change the lives and destinies of thousands, and sometimes millions of people.

Right now, there is a big crisis of understanding ordinary citizens and how they want politicians to behave. I think today, people want fast solutions, so politicians give unrealistic, populistic promises. People are ready to believe and vote for them and this leads to tremendous damage for the whole world. That’s why democracy is in decline.

There is a rise in leaders like Macron and Zelenskyy? Do you think people want candidates or parties without histories of corruption?

People feel threatened, insecure. They don’t feel that politicians can offer them security. I think that is why they are trying to find emotional and not rational ways to solve this insecurity. A person today may say “if I vote for someone who is more similar to me, he or she would be more aware of how I feel and suffer.” This is a big mistake, because being a politician is entirely different from being a constituent. When you hold political office, you face entirely new challenges. You have lots of stakeholders, unforeseen problems and limited resources.

Contemporary politics has seen a trend of increasing tendencies of exclusion, anti-immigration, and nationalism. What is the reason behind this?

I think that we can look at a speech made by President Trump, in which he presented patriotism and nationalism in opposition to globalism. I can hardly agree with this because I consider patriotism to include a vision of your country’s role in the world. Immigration is a global challenge. We are witnessing an unprecedented rise in migration throughout the world – a byproduct of the war in Syria, economic and socio-political conflicts in many African states, and the rise of ecological migration.  If we don’t think about these problems globally, especially global warming, we are not going to be able to solve them for each individual country.

What actions can we take in response to these recent events?

One consequence of the recent instability has been the loss of the human rights agenda. Protecting human rights used to be an uncontested issue, but not anymore. I think improving upon human rights is a great tool for coping with internal and external challenges and making one’s country a better place to live. Human rights is everyone’s basic safeguard, and I think it is quite important for everyone to demand this of their government. Human rights is about dignity and security, and they create the preconditions for a person’s development and prosperity in society.

What’s needed to be a politician?

Politicians first need to be open, honest, mature and strong enough to talk to their constituents, while also making realistic and honest promises. One of the reasons why I came to Yale was because I wanted to think about how to be a better politician and how to better serve not only in the interest of my country, but also of the world. I think my country has great potential both in terms of its human resources and its geographical position. Yet, previously established institutions are falling apart, and people are feeling insecure.  It is the job of politicians to communicate effectively, especially because there is so much disinformation out there. There’s no consensus on what the truth is, people don’t know how to find truth. Politicians need to consider future generations. If politicians do not attempt to cease this current disinformation dynamic, our children will live in a much worse world. This is why global challenges should not be divided from domestic challenges.

I also think that the role of politicians is to become an example for others. If one introduces sustainable policies, the politician should first start from his/her self. He or she should not expect their constituents to suffer and sacrifice while the politician drives a Mercedes, lives in a villa, and takes trips to the Maldives.  In my opinion, this is the main way to rebuild trust, to maintain a favorable reputation, and to get constituents’ support.

Finally, politicians need to discuss global politics in an open and honest manner.  The future of global politics is to preserve a country’s national interest, yet it should also be to cooperatively work together with other countries to solve global challenges, such as international peace, ecological safety, and climate change.

What are your future plans?

My main plan is to return to Ukraine. I did not think that I would miss it so much. Sometimes, we are looking for a better place to live but, there’s no better place than your own country. However, one needs to make a lot effort to improve his/her country. That’s why I’m going to return home and put all my effort in making it a better place. My dream is to rebuild a free country, which can serve as an example for many other similar countries and become a regional leader. I believe that many of my Ukrainian friends, who emigrated because of the instability caused by war, will return, too.