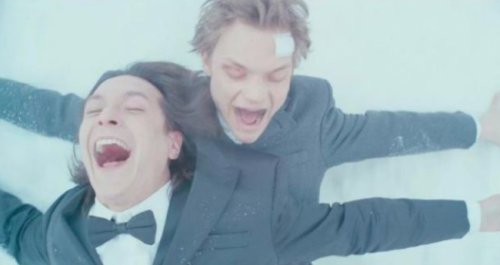 Russian Film at Yale invites you to discover contemporary Russia through the eyes of a talented new generation of emerging filmmakers. Tackling a range of contentious subjects — from homosexuality to police brutality — many of these films unleashed a storm of controversy in Russia and secured the reputation of their directors on the international circuit. Join us for the screenings — and stay tuned for the guest appearance of several of the film directors in person!

All films will be presented with English subtitles.

January 27, 2017 - THE MAJOR (2013, 99 min.)
Yuri Bykov
A gritty portrayal of police brutality and flagrant corruption, suffused with ambivalence and cynicism, and inspired by real-life events. Yuri Bykov has been hailed as the “next Balabanov” for his ability to bring together popular and arthouse audiences through smart, political, not-quite-genre films. Introduction by Dasha Ezerova, Slavic Languages and Literatures, Yale.

February 24, 2016 - NAME ME (2014, 93 min)
Nigina Saifullaeva
In this coming of age story, two teenage girls trade places when one is afraid to meet her biological father. What begins as a joke turns into a psychological drama revealing aspects of the girls’ characters that they had no idea existed. Introduction by Anastasia Kostina, Film and Media Studies & Slavic Languages and Literatures, Yale.

March, 7, 2016 - THE HOPE FACTORY (2014, 90 min.)
Natalia Meschaninova
Trash aesthetics and true grit mark this chronicle of Arctic youth in the remote industrial town of Norilsk. Seventeen-year-old Sveta pins her dreams of escape on a long-distance romance – and all her rage on the equally young local sex worker, Nadia. Introduction by Oksana Chefranova, Visiting Fellow in Film and Media Studies, Yale.

April 13, 2016 - WINTER JOURNEY (2013, 95 min.)
Sergei Taramaev and Liubov Lvova
A brilliant young classical singer falls in love with a street thug in a tale that frames class difference as the major complication within a same-sex romance in post-Soviet Russia. Schubert sets the score and the atmosphere of this visually and aurally gorgeous film. Introduction by Marta Figlerowicz, Comparative Literature and English, Yale.

Sponsored by The European Studies Council, with a Russian Studies grant from the Carnegie Foundation, The MacMillan Center, the Whitney Humanities Center, Yale Film and Media Studies, and the Yale Slavic Film Colloquium.