Uighur Poetry in a Time of Crisis 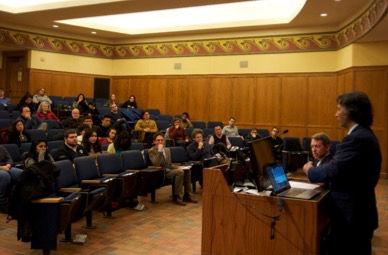 On February 10, the Department of Comparative Literature hosted Tahir Hamut Izgil, an Uighur modernist poet, and Joshua Freeman, historian of twentieth-century China and Inner Asia at Princeton Society of Fellows in the Liberal Arts, who has translated many poems from Uighur to English. This event was co-sponsored by the department of Near Eastern Languages and Civilizations; East Asian Languages and Literatures; and at the MacMillan Center, the Council on Middle East Studies; the Council on East Asian Studies; the Translation Initiative; and the Russian, East European, and Eurasian Studies Program.

Professor Samuel Hodgkin began the talk with an introduction to modern Uighur poetry and the current crisis of the Uighur people. Uighurs are Turkic people who mostly live in the Xinjiang Province of China. Since 2017, there are reports of ethnic cleansing through internment camps, self-criticism sessions and malnutrition. Uighur poets have been especially targeted, including Tahir Hamut, who wanted to go to Turkey for scholarly research but was imprisoned for three years for leaving the country without permission.

Some poets and intellectuals managed to escape. Among them is Tahir Hamut, who was born in the Xinjiang Province of China, went to college in Beijing, and writes poems in both Chinese and Uighur. He is also a filmmaker. 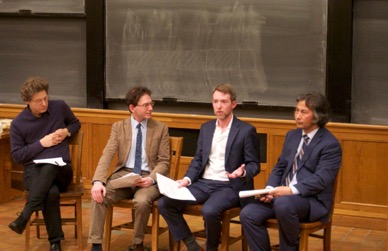 Dr. Joshua Freeman addressed the crowd to share his story of how he learned Uighur, met modern Uighur poets such as Tahir Hamut and Perhat Tursun. Dr. Freeman said that although Uighur novels had been relatively new, the Uighurs had “been writing poetry for thousands of years.” He pointed out that the Uighur language also has a poetic side because “the grammar is agile as you can add meaning to one word and its translation (to English) would take several words.”

The event continued by Tahir Hamut’s address where he talked about his life and poetry. He said that Ahmed Can Osman started a movement in Uighur modern poetry and that Mr. Osman influenced him and his friends, most significantly, another major modern poet Perhat Tursun.

Several poems, both in their original Uighur and their English translations were read to the audience by Tahir Hamut Izgil and Joshua Freeman. Among the poems read are “Her,” “Journey to the South,” “Wall,” “Returning to Kashgar,” “Road,” “Lost in Paris,” and “What Is It” (by Tahir Hamut); “Burning Wheat” and “Elegy” (by Perhat Tursun). You may find these poems (and more) by visiting this website: https://scholar.princeton.edu/jfreeman/translations

The audience also listened to Perhat Tursun reciting one of his poems from his voice. Mr. Freeman shared that Perhat Tursun could not be at Yale because he was detained a few and sentenced to prison in a few years ago in China.

The talk ended with a panel discussion with Tahir Hamut, Dr. Joshua Freeman, and Yale Comparative Literature faculty members- Samuel Hodgkin and Peter Cole. The event concluded with by a Q&A session with the audience and a reception.