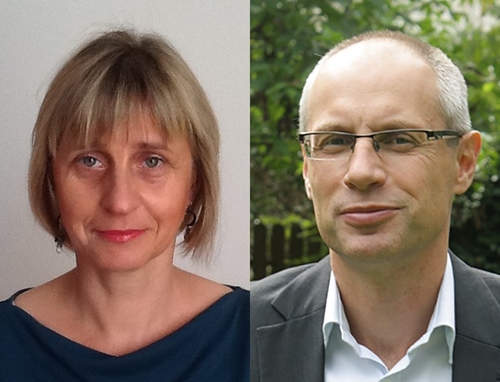 Anna and Pawel will spend the Spring semester at Yale as our latest William Rosenberg Senior Research Scholars. The Rosenberg Senior Scholar position was created to honor one of the archive’s founders, William Rosenberg. Rosenberg was a survivor from Czestechowa, Poland and a tireless advocate of the Fortunoff Video Archive and its predecessor, the Holocaust Survivors Film Project. Anna and Pawel’s tenure at Yale is co-funded by Yale’s Russian, East European, and Eurasian Studies Program.

Dr. Anna Machcewicz is an Assistant Professor at the Institute of Political Studies in the Polish Academy of Sciences in Warsaw.

In 2015 Anna received her PhD in Political Science and published her dissertation Rebellion: Strikes in the Tri-City in August 1980. Her dissertation book was awarded the Jan Długosz Award in 2016. Her second book, Prison letters of Zofia and Kazimierz Moczarski (Warsaw, 2015) also received awards in 2016. Her first monograph was a biography of Kazimierz Moczarski, the Polish journalist and member of the Polish anti-Nazi resistance movement who spent years in a communist prison. The English version of that book will be published in 2020 with Peter Lang. In 2016 she held a fellowship at the Imre Kertész Kolleg in Jena, Germany. Her research project there was titled “Prisoners in Poland 1944-1956 - an anthropological and comparative approach within the framework of East Central European experience.” She is now working on a book on the forms and mechanisms of building social relationships, and the strategies for survival in Polish prison system in the years 1944-1956.

Dr. Pawel Machcewicz is professor at the Institute of Political Studies of the Polish Academy of Sciences in Warsaw. Most recently Pawel was a fellow at the Imre Kertész Kolleg in 2018-2019 in Jena, and a 2017-2018 fellow at the Wissenschaftskolleg zu Berlin. He is the founding director of the Museum of the Second World War in Gdańsk (2008-2017). He was removed from his post by the Law and Justice government after opening the museum to the public, due to the government’s claim that the permanent exhibit was too “cosmopolitan” and “not Polish enough.” Pawel has taught at Warsaw University, the Nicolaus Copernicus University in Toruń, and was a co-founder of the Institute of National Remembrance.

In addition to their current research projects, Anna and Pawel will produce annotated critical editions of two testimonies from the collection.