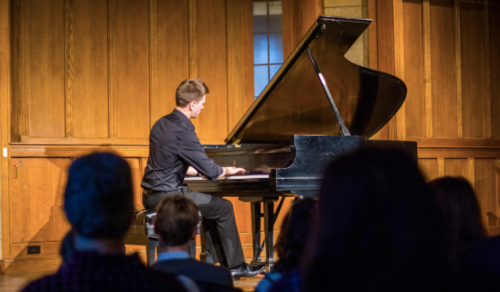 “Usually [cycles] are connected by one storyline,” Gryaznov said. “This one is not, but rather, this piece is exploring different emotional conditions. We can study this person, we can learn it, we can feel his personality through the whole cycle. It’s an interesting journey.”

The free concert drew a crowd that filled Sudler Hall to its brim — some attendees who arrived near the performance’s start time opted to sit on the stairwells of the lecture hall.

Gryaznov described Rachmaninov as influential to both Russian music and Gryaznov’s own growth as a musician. Even so, he does not claim to have mastery of the Rachmaninov repertoire — Gryaznov said that he was still “finding [his] way to understand” the preludes he performed on Saturday.

The second piano cycle Gryaznov performed — the “Six moments musicaux,” Op. 16 — was composed in 1896, during a contentious period in Rachmaninov’s life, according to Gryaznov. Gryaznov said that the cycle, which he described as being “penetrated with anxious moods,” was the first cycle he fell in love with during his musical training.

Gryaznov studied at the Moscow State Conservatory for his undergraduate and postgraduate degrees and he earned the Yale School of Music’s Artist Diploma in 2018, studying with School of Music professor Boris Berman. Gryaznov is currently on the teaching faculty of the Moscow Conservatory’s piano department.

Titus noted the difficulty of the 10 Preludes and commended Gryaznov’s technical ability. Still, she stressed that musical performance is not only about the technical difficulty of a work.

“Performance is about individual interpretation, what the artist brings to the piece,” Titus said. “Sometimes, during a performance, there is this great disconnect, but here, you will be completely drawn into this, because there is so much emotion. It’s really the interpretive approach in the artistry. Every time [Gryaznov] plays, he creates it anew.”

Rachel Calcott ’22 grew up listening to the music of Rachmaninov, and considers him to be her favorite composer. She described the experience of listening to Gryaznov play some of Rachmaninov’s very technical works as “overwhelming.”

“He approached the pieces very personally, describing how each piece captured something about Rachmaninov’s life and character,” Calcott said. “It felt like the truest possible interpretation and experience of Rachmaninov’s music, and I’m so grateful that the poster for it caught my eye on the way to the Berkeley dining hall.”

Gryaznov is also known for writing his own piano transcriptions. These transcriptions take works originally written for orchestras or other larger ensembles and reduce them to performances on just the piano. Because Gryaznov is currently on a concert tour, he is not actively pursuing a new transcription project.

“I try not to accept orders, so all of my works come from a moment of inspiration,” Gryaznov said. “So, I’m not scheduling anything for the future.”

Still, Gryaznov hopes to take on a new challenge and compose a piece of his own next year.

Gryaznov’s past projects include transcriptions of music from Tchaikovsky’s ballets “Romeo and Juliet” and “The Nutcracker.”