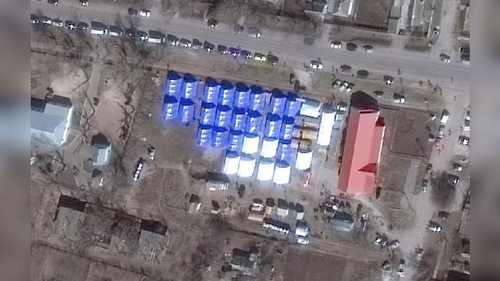 Anew report by the Yale School of Public Health’s Humanitarian Research Lab (HRL), a partner in the U.S. Department of State-supported Conflict Observatory, maps the system of filtration facilities and logistics employed by Russia and Russia-aligned forces to process Ukrainian citizens, prisoners of war (POWs), and other people present in Donetsk oblast beginning as early as March 2022.

For the report, “System of Filtration: Mapping Russia’s Detention Operations in Donetsk Oblast,” researchers used open source information and remote sensing data to identify with high confidence at least 21 filtration system locations in and around Donetsk oblast, an administrative region in eastern Ukraine. Russia and aligned forces have created a filtration system for civilians, POWs, and other personnel that is more than camps alone; locations are used for registration, holding, secondary interrogation, and detention. A single site can perform multiple and changing roles.

“Yale School of Public Health’s Humanitarian Research Lab has been documenting threats to the health and human rights of Ukraine’s civilians since the earliest days of Russia’s invasion,” YSPH Interim Dean Melinda Pettigrew said. “Today’s Yale HRL report presents the most comprehensive public assessment to date of this large-scale apparatus including extrajudicial detention in Donetsk oblast.”

Filtration sites can be organized into four main categories: 1) registration points, 2) camps and other holding facilities for those awaiting registration, 3) interrogation centers, and 4) correctional colonies (i.e. prisons) that serve as longer-term detention facilities.

Incommunicado detention of civilians is more than a violation of international humanitarian law — it represents a threat to the public health of those currently in the custody of Russia and its proxies.

“Incommunicado detention of civilians is more than a violation of international humanitarian law — it represents a threat to the public health of those currently in the custody of Russia and its proxies,” said Kaveh Khoshnood, an associate professor of epidemiology at YSPH. “The conditions of confinement documented in this report allegedly include insufficient sanitation, shortages of food and water, cramped conditions, and reported acts consistent with torture.”

According to Yale HRL’s investigation, the conditions described by those released from these facilities can constitute cruel, inhuman, and degrading treatment under international humanitarian and human rights law. The investigation found consistent allegations of overcrowded facilities, a lack of access to adequate sanitation, insufficient food and clean water, exposure to the elements, and the use of isolation. In some instances, descriptions of treatment endured by individuals — such as use of electric shocks, extreme conditions of isolation, and physical assault — may potentially constitute torture if proven.

“The Donetsk oblast filtration system run by Russia and their proxies represents an urgent human rights emergency,” said Nathaniel Raymond, executive director of Yale HRL. “International monitors need unfettered access to these facilities today. Every day that passes without independent monitors being present in these locations increases the risk that grave human rights abuses may be occurring with impunity.”

The Yale HRL report also identified objects which may be consistent with graves at Volnovakha Correctional Colony № 120, the Olenivka prison, which predate the July 29 explosion at the facility that allegedly killed 53 prisoners of war. The prison complex is currently used to house Ukrainian prisoners of war and civilian detainees. Two sites containing activity consistent with potential graves are visible — with one corroborating an April 2022 allegation of grave digging occurring at that location.

Featured in this article