VISIONS OF ECOLOGY IS A YEAR-LONG SERIES ON ART AND THE ENVIRONMENT IN EASTERN EUROPE AND EURASIA, SUPPORTED BY THE RUSSIAN, EAST EUROPEAN, AND EURASIAN STUDIES PROGRAM AT THE WHITNEY AND BETTY MACMILLAN CENTER FOR INTERNATIONAL AND AREA STUDIES AT YALE UNIVERSITY.

EVENT #3: METHODS AND CASE STUDIES | THURSDAY, FEBRUARY 9, 2023, 12:00pm ET
LINDA KALJUNDI
HISTORIAN AND CURATOR, ESTONIAN ACADEMY OF ARTS / TALLINN UNIVERSITY
“DE-PROVINCIALIZING ENVIRONMENTALISM IN EASTERN EUROPEAN ART (HISTORY): THE CASE OF SOVIET ESTONIA”
LUKAS BRASISKIS
ASSOCIATE CURATOR OF VIDEO & FILM, E-FLUX
“ANTHROPOCENE VISUALITY IN TIMES AFTER NATURE: A CASE STUDY OF ‘ACID FOREST’”
PAVEL BORECKÝ
VISUAL ANTHROPOLOGIST, UNIVERSITY OF BERN
“TUNING SOLARIS: FROM THE DARKNESS OF A SHOPPING MALL TOWARDS POST-HUMANIST CINEMA”
Linda Kaljundi is a historian and curator, Professor of Cultural history at Estonian Academy of Arts and Senior Research Fellow at Tallinn University in the framework of the research project “Estonian environmentalism in the long twentieth century”. She has published and edited a number of texts on medieval and early modern history and historiography, cultural memory and nation building in the Baltic region, as well as the history of environment and scientific illustration. In addition, she has curated exhibitions examining the role of visual culture in the constructions of identity, memory, and colonialism. She also is a member of KAJAK, Estonian Centre for Environmental History.
Lukas Brasiskis is an associate curator of film at e-flux. He holds a PhD in Cinema Studies from New York University and is an adjunct lecturer at NYU and CUNY/Brooklyn College. His scholarly and curatorial interests include eco-media and eco-film (with a focus on the potentials and limitations of mediation of the ecological crisis), world cinema within and beyond the modernist canon, histories of experimental film, aesthetics and infrastructures of the artists’ moving-image and intersections between cinema and contemporary art worlds
Pavel Borecký (Prague, 1986) is a social anthropologist, audiovisual ethnographer and film curator. His latest films “Solaris” (2015) and “In the Devil’s Garden” (2018) focused on Estonia’s consumption culture and decolonisation in the Sahrawi Arab Democratic Republic, respectively. In 2020, Pavel finished the feature ecographic documentary on the unfolding water crisis in Jordan. “Living Water” later travelled to film festivals such as Ji.hlava, Movies that Matter, DokuFest, Visions du Réel and CPH:DOX.
Virtual/Zoom Registration: https://bit.ly/VisionsOfEcology3

The hollowed-out spaces of derelict sugar factories documented by Slovak artist Ilona Németh in the project Eastern Sugar (2018-21) register the social impact of deindustrialization and symbolize the broken promises of the post-communist transition. The demise of the East European sugar industry also raises questions about the disappearance of the culture, lifestyles, as well as attitudes and practices towards the natural world, that grew up alongside socialist infrastructures. What can be learned from the ruins of sugar factories about the distinctive socialist path through the Anthropocene and what parallels can be drawn between the rise and fall of northern sugar beet and the social and environmental histories of southern sugar cane?

Dr. Maja Fowkes and Dr. Reuben Fowkes are art historians, curators and co-directors of the Postsocialist Art Centre (PACT) at the UCL Institute of Advanced Studies. Their publications include Art and Climate Change (Thames & Hudson, 2022), Central and Eastern European Art Since 1950 (Thames & Hudson, 2020) and Ilona Németh: Eastern Sugar (Sternberg Press, 2021). Recent curatorial projects include the exhibitions “Colliding Epistemes” at Bozar Brussels (2022) and “Potential Agrarianisms” at Kunsthalle Bratislava (2021). Their research on the “Socialist Anthropocene in the Visual Arts” is supported by a UKRI Frontier Research grant.
www.translocal.org 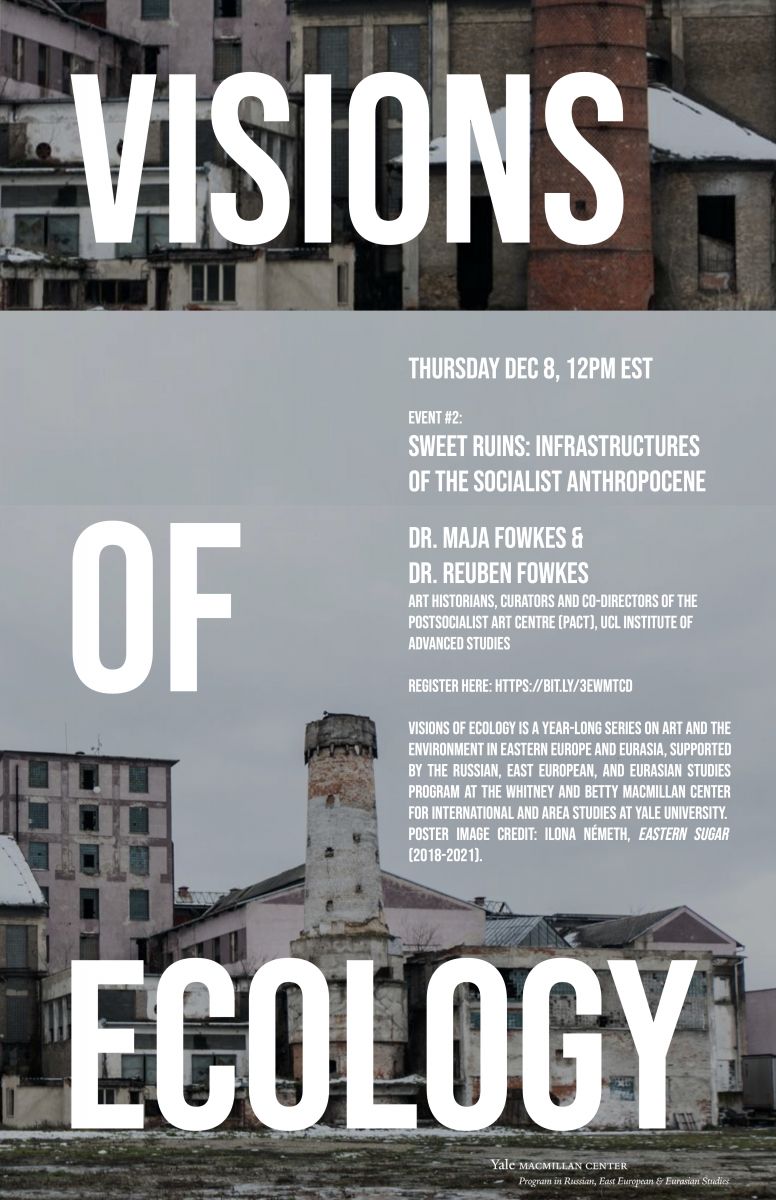 ANDY BRUNO
ASSOCIATE PROFESSOR, NORTHERN ILLINOIS UNIVERSITY
THE MYSTERY OF THE SIBERIAN EXPLOSION: AN
ENVIRONMENTAL HISTORY OF THE TUNGUSKA EVENT

ANASTASIA BOGOMOLOVA
ARTIST & RESEARCHER
THE ECHOES OF COLLAPSING MOUNTAINS AND CRACKING EARTH. ON THE PROJECT ‘UNDER THE DOME’ 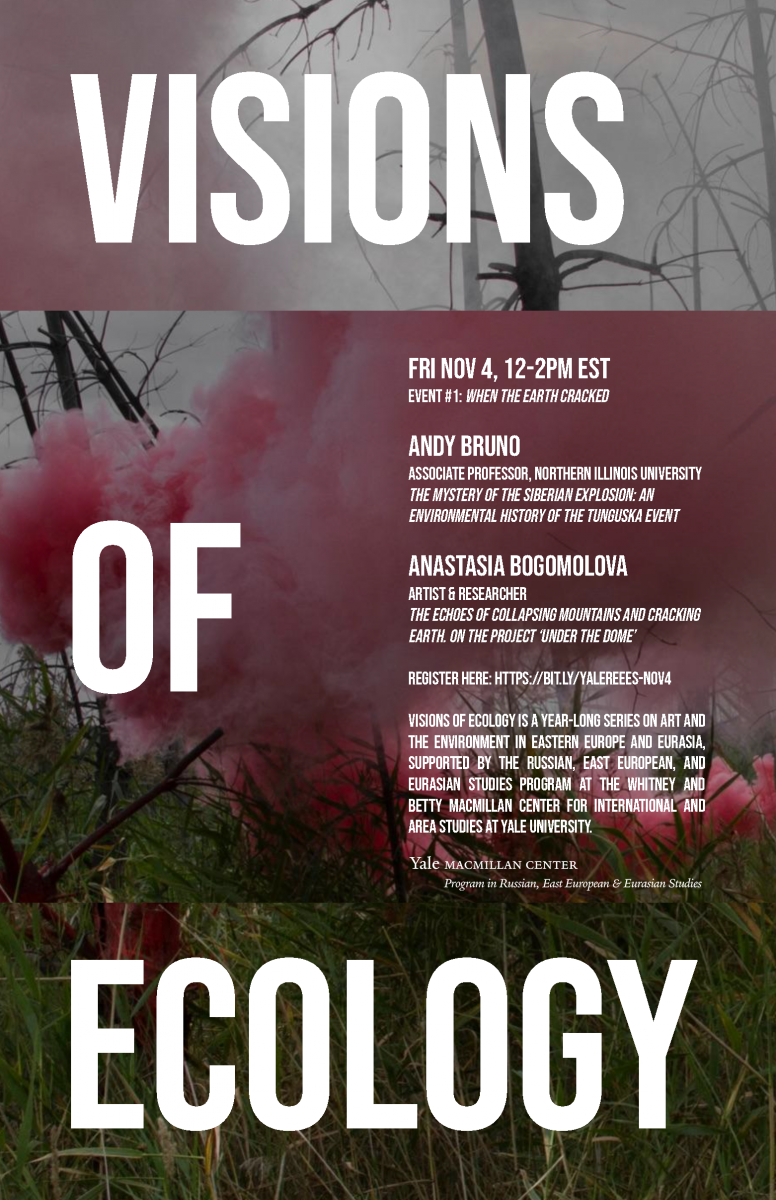