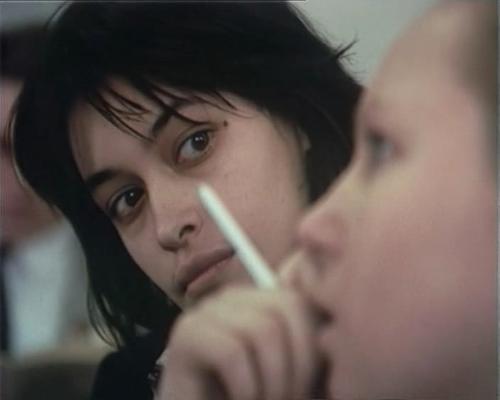 A review of the first film, The Asthenic Syndrome, of our Fall 2018 series, “The Long Farewell: The Films of Kira Muratova,” by Matthew McWilliams, Slavic Languages and Literatures ‘23.

The Asthenic Syndrome (Astenicheskii sindrom, 1990) is Kira Muratova’s sixth feature-length film, as well as her most famous one—according to Helen Ferguson, “[t]his is attributable to its importance as a portrait of ‘a society on the brink of almost total political, social and moral anarchy’ and its notoriety as the last film to be banned in the USSR” (40).

“Asthenia” means “a lack of strength, diminution of vital power, weakness, debility,” according to the OED. Irina Sandomirskaia writes that in the “medical language of [Soviet psychiatry of] the 1970s […] ‘asthenia’ was a term that served as a euphemism for milder and fixable, manageable forms of madness” (66). Apparently, “the asthenic syndrome” is not (and has never been) a real nosological entity—nor is it so much as mentioned in The Asthenic Syndrome—but Muratova herself described it as “a condition of nervous exhaustion, resulting in inappropriate behavior or lack of affect […] in the olden days it was called hypochondria, or black melancholia. […] A symbol? It’s not for me to judge” (qtd. in Taubman 1).

The Asthenic Syndrome begins in black and white with the story of a newly widowed doctor named Natasha, depicting the extreme and sometimes self-destructive manifestations of her grief. Forty minutes in, however, this narrative is revealed to be a film within a film—The Asthenic Syndrome suddenly switches to color, and it begins to follow an apparently narcoleptic schoolteacher named Nikolai. It also becomes increasingly fragmentary and unapologetically (if not aggressively) experimental.

According to Jane Taubman, the first part of the movie “was based on a scenario [Muratova] had written in the 1970s”, whereas the second part was “based on a scenario written by Sergei Popov, who also plays the lead role of Nikolai,” and another screenwriter, Aleksandr Chernykh, “contributed the twist [i.e. the film-within-a-film conceit] and the title which holds the two parts together” (2). To some extent, the film also came together during shooting and editing: scenes were added, removed, and rearranged, and the final cut is significantly different from the “officially approved shooting script that Muratova prepared in 1988”—among other changes, Taubman notes that “[t]he original script reveals at an early stage that we are watching a film within a film – members of the audience are seen getting up and leaving in disgust” (3).

Muratova completed the film and submitted it to Goskino, the State Committee for Cinematography (Gosudarstvennyi komitet po kinematografii SSSR), in October 1989. They were hesitant to release the film—not because of its full-frontal nudity, but rather because of the unprecedented profanity in its final scene. However, the Odessa Film Studio submitted the film to the Berlin Film Festival, where it premiered to critical acclaim in February 1990, after which it was approved for release in the Soviet Union.

The content of The Asthenic Syndrome is clearly meant to shock—not only with its nudity and profanity, but with its repeated depictions of cruelty, violence, and the mistreatment of animals, including extended documentary footage of a dog pound. Muratova doesn’t take it easy on her viewers: the dog pound scene is followed by an intertitle that reads, “[People] don’t like to look at this. [They/We] don’t like to think about this. This shouldn’t have a relationship to conversations about good and evil.” In this direct address to (and indictment of) the audience, Muratova’s technique is pointedly non-illusionistic, calling attention to itself.

In addition to its shocking subject matter, the film is also formally unsettling: for instance, it breaks with the conventions of cinematography, including eyeline match and the 180-degree rule. Muratova’s use of sound is also noteworthy: the film features asynchronous audio, moments of jarring dissonance, and frequently overlapping dialogue. (Rather than an Altmanesque reality effect, the latter technique serves as an index of the atomization of society, showing people talking over and around each other: this is less ‘dialogue’ than a series of monologues, demands for recognition and validation rather than communication.) For most viewers, however, the most challenging aspect of The Asthenic Syndrome is the fact that narrative, in the sense of a single, coherent plot, is not its organizing principle. Instead, the film is broken up into a series of loosely connected vignettes, and it does not focus on any one individual. The merit of this decision is that it allows for a broader representation of society than is afforded by more traditionally structured films.

The society Muratova depicts is not a pretty picture—it is characterized by indifference, injustice, suffering, and chaos—and many commentators claim that the film’s “apocalyptic” atmosphere foretold the dissolution of the Soviet Union in 1991.  However, The Asthenic Syndrome is more than a narrow critique of late Soviet society; at times, it seems to be based on a (highly negative) conception of human nature, almost in a religious sense (as suggested by the evocations of late Tolstoy). Some critics argue that it is essentially a film about death: according to Dmitrii Popov, the “cosmic emptiness formed around [Natasha]” in part one reflects “the death of God […] and the second, colour section of the film is life after death, a surrealistic world ‘on the other side,’ a world without a creator, condemned to destruction” (qtd. in Taubman 43). On the other hand, the film’s title suggests a diagnosis: it is in a scientific register rather than a moral or metaphysical one. In this regard, Muratova shows us the symptoms of the disease—including inappropriate emotional responses, arguments, and sudden eruptions of violence—without ever pointing directly to an underlying cause. This openness is precisely what has allowed for such a diversity of critical interpretation, and it is one of the reasons why it is so difficult to say just what The Asthenic Syndrome is ‘about’. Perhaps we should simply take Muratova at her word: “Every time I am asked what the film is about, I reply, quite honestly, ‘It’s about everything’” (qtd. in Rosenbaum 43).

Sandomirskaia, Irina. “A glossolalic glasnost and the re-tuning of the Soviet subject: sound performance in Kira Muratova’s Asthenic Syndrome.” Studies in Russian and Soviet Cinema, vol. 2, no. 1, 2008, pp. 63-83.