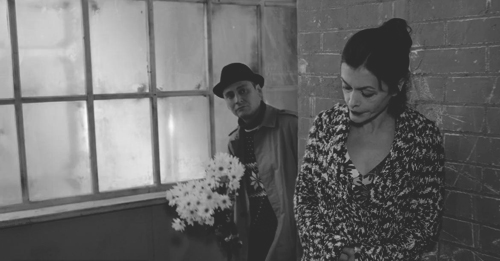 A review of the final film of our fall series, “The Long Farewell: The Films of Kira Muratova,” by Carlotta Chenoweth, Slavic Languages and Literatures.

Eternal Homecoming, or as it might better be translated, “Eternal Return,” is Kira Muratova’s final film, finished in 2012 and released in 2013. As the title suggests, the film is much influenced by Nietzsche’s concept of eternal return or “eternal recurrence of the same,” which, simply expressed, supposes that all events repeat themselves through an eternal series of cycles. This idea takes on a literal meaning in the film, which repeats a similar storyline using a variety of actors and sets. Moreover, it is clear the extent to which this film is also a return to previous works: for example, all of the actors in the film have appeared in other films of hers, not to mention the numerous recycled lines, motifs and cinematic devices that appear in the film.

One of the most striking facets of the film is its theatricality. The staging on set, particularly in the first scene which employs minimal camera movement, shows the actors standing close but to each other’s backs in stances reminiscent of the Stanislavskian tradition. As it is often remarked on the influence of Chekhov on Muratova’s work, I will only add here that once again we see the two primary characters, named the ‘man’ and the ‘woman,’ speaking not to each other, but seemingly through one another. Insofar as a similar if not identical script is reused for each scene, the actors seem to overact – by cinematic standards – in order to distinguish themselves from other iterations. The majority of the actors in the film are primarily stage actors based in Moscow, most notably Oleg Tabakov and Renata Litvinova from Moscow Art Theater, Alla Demidova from the Taganka Theater, or Sergei Makovetsky from the Theater Bakhtangov. In each actor’s attempt to distinguish one performance from another, the film takes on a kind of showcase quality. We cannot name the characters truly by name, but rather must refer to them by their actor.

What about the scene itself that we see replayed throughout the film? For those of us who remember our second film in the series and Muratova’s directorial debut, Brief Encounters, we might recall Vladimir Vysotsky’s character who seems to be in love with both his wife of many years as well as a young girl. Vystotsky’s character is notably absent from the present timeline of the film, only remembered by the two women who love him. The ‘man’ in Eternal Homecoming is in a similar predicament, traveling off for work in some unknown town, like Vysotsky’s character; however, in this film he is aggressively present, intruding for a ‘brief encounter’ on a woman who is an almost stranger to him.

Each portrayal of the ‘woman’ shows her in a domestic scene, occupied in some pointedly feminine task: making jam, taking care of her cats, sewing, and so on. The film opens with a similar cinematic still-life as Brief Encounters, with Natalya Buz’ko preparing some jam. The woman character is never shown outside of her domestic, or in one case, workspace, all of which are overabundant in objects yearning for symbolic interpretation. The ‘man’ is always interrupting her domestic life, and yet physically preventing her from leaving her home.  As for the man, his identity seems unimportant, we never do learn if he is Yury or Oleg.

To return to the idea of “eternal return,” one of the main qualities of this film is its almost aggressive attempt to avoid any sort of resolution, always cycling back through its script. I would argue that not only is there no resolution to the film-within-a-film, which we are told are just fragments of an incomplete project, there is marked resistance to provide resolution to its own interpretation. The most heavily signified object in the film – that of the wound white rope that seems to have no beginning or end – takes on absurd proportions by the end of the film, with ropes covering the walls of the domestic interior or adorned in Demidova’s hair.

According to the credits, Muratova’s husband, Evgenii Golubenko, wrote the film’s conclusion – the first hint to which we are provided almost exactly at the halfway mark, when we cut to color after the rope has suddenly been pulled free of its knots. The character of the producer is played by the film’s actual producer, Oleg Kokhan, and the stand-in director is played by Muratova’s own grandson, Anton Muratov. Golubenko is also the painter of much of the art found in the film, including the painting, “Ghost in a Chair,” that appears repeatedly. As the woman character asks, “Is painting hung just right?” the word for painting takes on its other meaning, which in Russian can also refer to the scene of a film. The final scene shows two large white leather armchairs, which I would argue are meant to resemble Golubenko’s painting. The ghost in the chair then, if read literally, could resemble those unseen figures that shape art: censors, producers, etc. – who played such a significant role in Muratova’s career. However, as the film ends in overly extended laughter, it remains unclear how or if any of it should be interpreted.